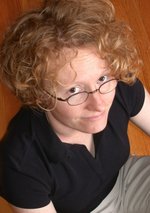 Garden Rant co-founder Amy Stewart is the author of seven books. Her latest, Girl Waits With Gun, is a novel based on a true story. She has also written six nonfiction books on the perils and pleasures of the natural world, including four New York Times bestsellers: The Drunken Botanist, Wicked Bugs, Wicked Plants, and Flower Confidential.  She lives in Eureka, California, with her husband Scott Brown, who is a rare book dealer. They own a bookstore called Eureka Books. The store is housed in a classic nineteenth-century Victorian building that Amy very much hopes is haunted.

Since her first book was published in 2001, Stewart has appeared on NPR’s Morning Edition and Fresh Air, she’s been profiled in the New York Times and the San Francisco Chronicle, and she’s been featured on CBS Sunday Morning, Good Morning America, the PBS documentary The Botany of Desire, and–believe it or not– TLC’s Cake Boss.

Amy has written for the New York Times, the Washington Post, and many other newspapers and magazines.
She co-founded Rant with Susan Harris and Michele Owens and actively contributed from 2006–2013.