At first, I didn’t think the answer would be so simple. I thought I’d page through a few UK garden magazines and be left with a vague sense that their photographs were better, plants more unusual, writing more clever, and that they were just–well, hipper and smarter than us in the way that all things European tend to be. But in fact, when I picked up the May issue of the BBC Gardens Illustrated (not necessarily even the best UK garden magazine if you ask the locals, just the one I happened to be able to find at my bookstore), the answer was immediately obvious:

“The virus is a sneaky bitch, letting the whole plant rise and bud and fill you with expectation before sucking the life out of it. By the time this magazine is published I’ll either be swaying giddily over T. ‘Generaal de Wet’ or retrieving his remains for immolation. Even if the early tulips come clean there will be tension still, because there is no certainty of being all-clear until the last parrot has uncurled its teeth. You wouldn’t put up with it for anything but love.” 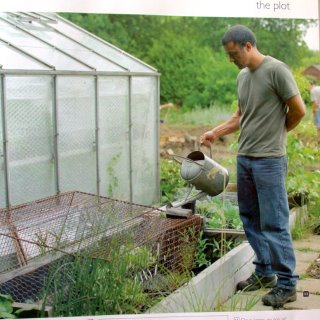 Oh, one more thing American garden magazines lack:  Hunky British gardeners! Where’s the sizzle in garden magazines, anyway? Gardening is such a deliciously dirty and sweaty activity anyway, so come on–let’s see some muscles and some curves! Show us your freckles! Peel me a grape! Between the overripe berries, the outdoor showers, the droning of the bees, the wisteria-covered arbor at sunset–are we really going to pretend that gardening is not an inherently lascivious activity?