Now I’m no lawyer but it looks reasonable enough to me.  And why not
encourage people to behave ethically?  My only question is: Exactly how
should we "expose unethical practices of other bloggers"?  Report them
to the FCC?  But we don’t want the FCC mucking up the Internets,
now do we?  So maybe we shouldn’t do anything to invite them to our
party.

Later the same day that Craig briefly questioned my ethics, my in-person friend Julie Miller forwarded me a press release she’d received about PayPerPost,
a new way for bloggers to get paid for promoting products.  That link
takes you to the information for advertisers, which explains the
process of posting "opportunities," meaning products for bloggers to
write about.  Okay, but then the posts are "reviewed and approved"
before payment.  I signed up so I could actually see these
"opportunities" and guys, you’re not missing a thing.  Lots of "write
positively about our mortgages" and even "recommend our drug rehab
program."

So PayPerPost brings to mind these sticky wickets in the Code of
Ethics: 1) a blogger should "distinguish factual information and
commentary from advertising and shun hybrids that blur the lines
between the two" and 2) a blogger should "deny favored treatment to
advertisers and special interests and resist
their pressure to influence content. When exceptions are made, disclose
them fully to readers."

But what about the 6 bucks I was going to get paid for recommending the Hazelton Clinic?

Or more directly on point, are we being compromised by our new Sloggers?
Discuss among yourselves, but take into account this email from Alec –
the guy who so cunningly seduced us with his offer of free shoes.

The
comment section on your post has got to be one of the funniest list of
replies I have ever seen while doing this job. I am rolling in my
chair. The interactivity and instant feedback are incredible, but the
humor of your audience is beyond compare. I needed a good laugh today
and boy did I get it – thanks!
We remain
your ever humble foot-servants,
Sloggers Team, Gardena,
Calif.
P.S. Keep us in mind next year for the same format or
something you dream up!

So it’s not exactly Monsanto asking us to shill for Round-Up.  It’s just our new friend Alec, the humble foot-servant.  (And Alec, here’s the reference to naked gardeners we’re all snickering about.) 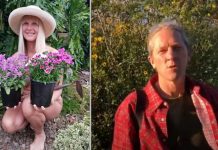