Quite some time ago, I was sent a few of these Plant Defenders to test and review. As a person who gardens with chickens, I could immediately see the appeal of anything that would give new plants a little protection. Spikes anchor the thing into the ground, and as you can see, there’s a moat that you can fill with "any liquid or solid solution" that would protect your plants from attack.  There’s also a lid, not pictured here, designed to stop airborne assaults.

I’ve been using them around the garden for a while now, but haven’t reported on the results because the plants I was trying to protect never did very well inside the Plant Defender. I’m not blaming this on the Plant Defender; it’s not unusual for a plant to fail to thrive in my garden for any number of reasons.  In the photo above, though, a lily finally did emerge from its fortress, prompting me to post my review at last.

These things retail for four bucks, and because they’ve been in my garden for a year, I can say that they are fairly sturdy.  So what bothered me about the Plant Defender?  Part of it is that I just can’t get excited about putting little plastic things around the garden.  If it were made of bamboo, or recycled something-or- other, maybe I’d be more into it.  But there’s something decidedly un-organic, aesthetically, and perhaps even vaguely militaristic, about these things.

I’ve used crumpled chicken wire to protect plants for years, and it works just fine for less money.  Because I have chickens, I usually have a little leftover chicken wire that I need to put to some purpose anyway. If you need a barrier to protect your plants from birds or dogs or deer, you could try these, but you could probably also rig up something out of stuff you have in the garage. And if you have so many snails and slugs in the garden that every plant requires a moat of beer or poison to keep them away, you’ve probably just put the wrong plant in the ground.

The Plant Defender is not for me.  They also sent me something called a Sprinkler Mate, which they call a ‘sprinkler system enhancement.’ I just couldn’t figure out what I was supposed to do with it, and I finally figured out that perhaps it is supposed to be hooked up to some kind of existing irrigation system.  I don’t have an irrigation system — just a few garden hoses thrown around haphazardly and a soaker hose in a dry spot.  So I just couldn’t figure out how to put this thing to work in my garden. If I do, I’ll let you know.

Coming up soon: a review of something that is both plastic and irrigation-oriented, but also extremely stylish.  I am very excited about trying it out.  Stay tuned. 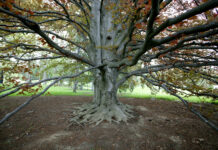