I’m a great believer in the gardening analogy. If you’re gardening and
you go away for six months, it’s a mess. You have to pull weeds when
they’re small and keep track of things. The same is true in diplomacy.
You’ve got countries of various shades of friendliness and enmity
around the world, and you have to garden. You have to set an agenda,
talk to people. If there are things you don’t like, you have to say
what they are. You do that, and when a problem comes along, you’ve at
least laid a base and have the ability to work. You have to do that all
over the world.

And the ladybugs are like UN peacekeeping troops, except that they give birth to huge babies that eat those who seek to destroy us, rather than standing around in blue helmets urging everyone to remain calm. While the giant enemy-eating babies may sound tempting, it makes for an unfortunate photo op, so we recommend sticking with the guys in blue helmets for now. 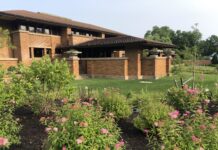