Why are doomsayers always so cheery? My friend Jim Kunstler–author of 2005's The Long Emergency, a fantastically prescient book about our unsustainable oil- and derivatives-fueled economy, and subject of Ben McGrath's recent story in The New Yorker, "The Dystopians"–is one of the more playful thinkers I know, really optimistic in manner if not in outlook.

Now, we have an interview with Jame Lovelock in New Scientist.  He is the author of the Gaia theory, which, as far as I have grasped it from cursory non-study, argues that the earth behaves as one largely self-regulating organism, in which life contributes to the conditions that promote life.

Lovelock tells New Scientist that nine-tenths of the earth's population may disappear in the 21st century, thanks to global warming:

I think it's wrong to assume we'll survive 2 °C of warming: there are already too many people on Earth. At 4 °C we could not survive with even one-tenth of our current population. The reason is we would not find enough food, unless we synthesised it. Because of this, the cull during this century is going to be huge, up to 90 per cent. The number of people remaining at the end of the century will probably be a billion or less. It has happened before: between the ice ages there were bottlenecks when there were only 2000 people left. It's happening again.

I don't think humans react fast enough or are clever enough to handle what's coming up. Kyoto was 11 years ago. Virtually nothing's been done except endless talk and meetings.

When the interviewer suggests that this is a depressing outlook, Lovelock begs to differ: "Not necessarily. I don't think 9 billion is better than 1 billion."

Glad he can see the bright side of mass starvation.

When asked, however, whether anything can save us, Lovelock argues that we have to focus on the carbon sent into the atmosphere by the natural decay of plants and animals, because it dwarfs the carbon we're producing.  He suggests that biochar is the only plausible answer–in other words, the slow burning of organic matter and then burying it in the soil, where its carbon is tied up for a very long time.

This idea is the brainchild of scientists who've studied the fantastically fertile soils of the Amazon–and determined it is the charcoal put into them long ago by the pre-Columbians that makes them so superior.  We've posted about it before here. Nature had a very good story on the subject, but you have to be a subscriber to access it.

Biochar sounds good to me–grow fantastic crops and save your species at the same time. 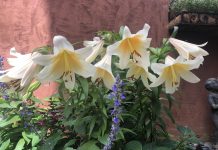