Ah, the good old days of HGTV on Sunday mornings, when there were two whole shows worth watching – perennial favorite Paul James and the always interesting Landscaper's Challenge.  Now there's still Paul – one episode, not two – but no more Challenge.  In its place is Yard Crashers, a gardening show solidly in the mold of reality TV.  It stars Ahmed Hassan, a hunky and engaging landscaper somewhere in California.  That part is fine with me but you won't believe the concept:  he and his camera crew roam the aisles and parking lots of Home Depots on Saturday mornings asking customers to "Take me home with you and I'll do a makeover on your yard."

Now as appealing a package as Ahmed clearly is, who among you would want to be on national TV looking like you look on Saturday morning at the hardware store?  So this gotcha trick is really awkward, with people pleading with him to get the camera away, or worrying about what their husband will say.  You know, the icky human drama of reality shows.  And when he finally nabs a willing customer the resulting two-day makeover is all hardscape and fire pits.  (I exaggerate but not by much.)

Now I was going to leave the charming Ahmed alone but the last episode crossed a line I didn't even know existed – gardening shows that are so macho as to actually offend women.  The willing homeowner in this episode is a young guy whose landscaping dream is a back yard so cool it'll attract girls.  So two days later he has a HUGE, hideous spa with built-in sound system, and a yard (not a garden by any stretch) strewn with places for stashing his brewskis.  All bad enough, but at the end of the show when he's asked how he likes his new yard he responds with a creepy grin, "It'll definitely help me bag some honeys."

HGTV has come to this. 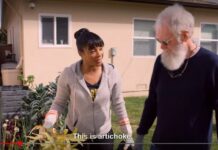