First, go out and get the best fruit you can find.  Ripe, juicy, almost past-their-prime peaches and nectarines would be a good start.  Watermelons or cantaloupes should also be very high on the list.  Strawberries will work, but a firmer fruit like a mango might not. You want more juice than pulp for a drink like this.

Get at least a dozen fresh limes as well.  No bottled lime juice allowed.

You’re also going to need a bunch of mint. If you’re not growing it already, pick up a plant at the farmer’s market and get that started for next time.   You need spearmint, not peppermint, and if you can find it, get a variety called ‘Mojito Mint,’ which purports to be an actual Cuban strain, or ‘Kentucky Colonel,’ the classic Southern mint julep variety. Grow it in a pot to keep it from taking over, and start a new pot from a runner every few years to keep the flavor fresh, as older plants get a little tough and lose some sweetness. (Log House Plants supplies 'Mojito Mint' to indie nurseries on the West Coast; both are also available from Richters, which is in Canada but ships to the US.)

Now go pick up some rum and, for a variation I’ll get to in a minute, some tequila.  Mojitos are traditionally made with silver (unaged) rum, but amazing things happen to rum when you put it in a barrel, so I’m in favor of sneaking some dark rum in, too. Do yourself a favor and buy something decent. After all, if you’re not much of a drinker, the bottle will last forever, and if you are a drinker—well, you’ve made the commitment, so drink good booze.  Cruzan rums are perfectly nice, and St. Lucia Distillers has been winning some awards lately, so give them a try.  For tequila, I’m drinking a lovely 123 reposado tequila that will make you love tequila even if you’ve been burned before. If you can’t find that, Espolón is also great, and reasonably priced at just over twenty bucks.

If you want to get fancy and you’re feeling a long-term relationship with fruity, rum-based drinks coming on, pick up a bottle of Velvet Falernum at the liquor store, too.  This is a sweet, spicy syrup that adds a little indefinable something to tropical drinks.  Ever noticed how that drink you had on St. Croix never tastes as good when you make it at home?  Short of a ticket back to the islands, Velvet Falernum is what you’ve been missing.

In a one-quart mason jar, combine the mint leaves and the simple syrup. Gently crush the mint leaves with a muddler or wooden spoon.  Add the rum, then squeeze the limes directly into the jar, ideally using a hand-held  citrus squeezer that expresses not just the juice, but the oil from the rind as well.

Now add the fruit juice.  You can either puree it and put it through a strainer, or use a food mill.  A little pulp is fine.  Add a splash of Velvet Falernum if you’ve got it.

Screw the lid on the mason jar, shake well, and pour a little into a glass over crushed ice.  Add equal part club soda, taste it, and see if you like it.  Add more of any ingredient until you’ve got it right.

Oh, and about that tequila variation:  Swap the rum for tequila, cut the lime juice, sugar, and mint in half, and forget about the Velvet Falernum and club soda. Once again, adjust all quantities to taste. 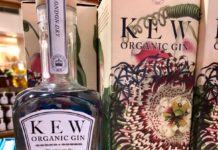