Here’s the iconic view of Thomas Jefferson’s kitchen garden at Monticello, showing his little Grecian temple of a garden pavillion in the middle of the 1,000-foot-long vegetable garden. 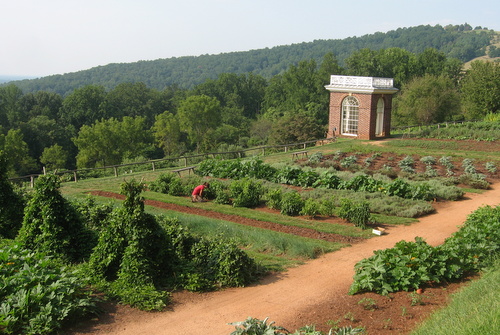 Jefferson famously identified his profession as “farmer,” even after his presidency, and fittingly, he had this garden built for his retirement years. It took seven slaves using a mule and cart three years to create this terrace out of the hillside, finishing in 1809.  The two-acre garden is divided into 24 “squares” arranged according to which part of the plant was being harvested – whether fruits, roots, or leaves.  The hot south-facing site allowed for an extended growing season.

As an eater, Jefferson chose mainly vegetables, using meats as condiments.  For salads he planted lettuces and radishes every two weeks throughout the growing season.  And get this – to produce a suitable salad oil for all those salads, he grew his own sesame.  His favorite cooked vegetable was the pea, of which he grew 23 varieties.

Jefferson also grew gobs of fruit, like the figs you see here thriving in the warm microclimate along the stone wall of this south-facing hillside.  Currently about 50 fig trees are grown here and Director of Gardens Peter Hatch tells me the best ones are the ‘Marseilles’, which Jefferson brought from France, and ‘Brown Turkey’, which is today the most popular variety grown in this region.

In total, Jefferson grew about 600 fruit trees, including plenty of apple trees for cider, brandy and livestock.

Jefferson, the Messy but Scientific Gardener
From the age of 67, Jefferson tended this kitchen garden, usually with the help of an elderly slave.  He collected seeds and carefully recorded results from his experimentation with 330 vegetable varieties in his garden book until his death at age 83.  Peter Hatch has read the book in its entirely and says it’s replete with the word “fail”.  Jefferson apparently didn’t bother to weed or to edge the beds, as his notes only reflect sowing and harvesting – and the occasional “killed by bug”.

(If you click on Jefferson’s garden book you’ll notice that its owner, the Massachusetts Hort Society, asks for feedback about the website and indeed I gave them some because surely there are better ways to display this historical treasure.)

Another detail about Jefferson’s recordkeeping I found intriguing is that during his eight years in the White House he charted first and last days of every crop’s availability at the farmer’s markets in the city.  Ever the farmer!

Today
The process of recreating Jefferson’s kitchen garden began in 1979 with two years of archeological excavation. Today, produce from the garden is used in the visitors’ cafeteria, given away at their harvest festival, and used in regular Saturday fruit and vegetable tastings.  Seeds from the kitchen and ornamental gardens are collected and sold, and some are grown today in the White House kitchen garden. 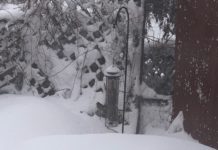