I recently visited D.C.'s new and long-awaited Martin Luther King Memorial.  In the words of its designers, "the entire MLK Memorial is conceived in a landscape tradition, characteristic of other recent memorials, such as the FDR and the Vietnam Veterans War Memorials. This approach, which utilizes the contouring of the earth, the shaping of the site and natural elements to convey meaning, is exceptionally well fitted to a memorial for Dr. King, who was inspirational in his oratory and extensive use of metaphorical reference to the American landscape."

I'm a big fan of the new landscape tradition for memorials, which has become so popular with reviewing agencies and the public since the Vietnam Veterans Memorial was unveiled in 1982.  As controversial as it was at first, The Wall has become the most visited memorial in town.

Another superb example of this style is the FDR Memorial, which opened in '97 and i

s my personal favorite.  It was designed by the late, great landscape architect Lawrence Halprin.  Though a crowd-pleaser from the start, the fact that its depictions of FDR hid his disability was controversial in the disabled community, and a statue of him in his chair was later added at their insistence (photo right).

But let's get to the MLK, shown below in the designer's drawing.  The site is perfect – near the Lincoln and directly facing the Jefferson across the Tidal Basin.  (And if you're wondering, this IS the first memorial on the Mall honoring a non-president.  Much less an African-American.)

Because the memorial consists of one long wall for quotations, one statue, two large blocks of stone (the "Mountain of Despair" through which you walk to get to King's statue) and 158 cherry trees, it certainly qualifies as a landscape-style memorial.

And for my taste, that's a good thing.  We have more than enough of the old-style monuments and memorials – all stone and little or nothing that's living.

That said and with all the appropriate disclaimers (the monument is totally deserved, etc) I was disappointed.  The space just seemed so cold, it might as well have been all-stone.  And the size of the statue – at 30 feet – was overwhelming, especially compared to those life-size statues of FDR, or even to Lincoln (at 19 feet).

But I'm a gardener and I know to come back next spring when all the cherry trees are blooming, and again several years from next spring when they're full-size and blooming.  Landscapes take time.  And it's January now, after all.

Now a word about the controversies, because no major memorial gets built these days without a slew of them, the 9/11 Memorial being a prime example of that.

In the case of the King Memorial, this design isn't universally loved and may never be.  There's the size and confrontational (to many eyes) stance taken by King in his statue, and the fact that it was carved by a Chinese artist.  (It didn't help that he boasted that this statue would bring honor to the Chinese people!) But a big, unexpected controversy has erupted over the truncated wording of the quote carved on one side of the statue.  It's "I was a drum major for justice, peace and righteousness," which was shortened for design purposes from:

Big diff!  Maya Angelou has protested that “The quote makes Dr. Martin Luther King look like an arrogant twit. He was anything but that. He was far too profound a man for that four-letter word to apply." We'll see if pressure from vocal critics will result in some recarving, back to the original longer quote.

Here's a short video of memorial in all its cherry-blossom-flowering glory. 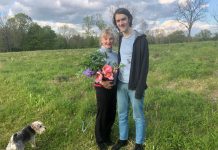 Blackberry Winter and a Bucket of Blooms