So several years ago, I wrote this book about worms.  There were no such books on worms at the time–in other words, there was no sort of narrative natural history that told the story of worms and earthworm science and the role that worms have played in ecology and agriculture and human civilization.

So since I couldn't find that book, I wrote it myself.

That was 2004.  My publisher, Algonquin, being the wonderful publisher that it is, kept it in print all this time, and when the warehouse ran out of books a few months back, they decided to re-issue it with a cool new cover and a bit of updated information in the appendix.

So here it is–the re-released Earth Moved, which you can win by posting any sort of earthworm-related comment.

There's something else, too:  Right around the time Algonquin was thinking about putting a new cover on the book, I heard from the people at Nature's Footprint, makers of a stacking worm bin called The Worm Factory.  They were fans of the book and wanted to include an excerpt in the manual they send out with their bins.

They also offered to give away some worm bins when the book re-launches.  And so we are gathered here today to give away not just a book, but also a bin, to some lucky winner.  Check out the bins here, and if you don't win one, they are giving GardenRant readers a 10% off coupon, so click through to get that, too.

I have had a stacking bin much like this one since I lived in Santa Cruz many years ago.  It's probably close

to 15 years old and it's still in great shape.  Mine wasn't a Worm Factory, but I have one of those too, now, and it's actually a bit better for life on the porch, patio, or garage, because it's a bit more compact.  Also–made in the USA. Recycled materials.  Very nice.

So!  Comment to win.  Gen is also doing a giveaway over at NorthCoastGardening, so you can go over there and have another shot at it.   The winner will get a choice of black, terra cotta, or green, but you don't need to specify that in your comments–I'll get all that from you if you win.

Have fun!  Oh, and here's Gen and I talking about the benefits of a stacking bin vs. the old-school plastic tub. With guest appearances from my chickens. 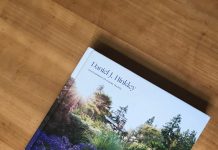