Please welcome photographer David Perry who, along with author Debra Prinzing, has been at work on this book about sustainable cut flowers, The 50 Mile Bouquet, for–well.  A loooooong time.  Honestly, I can think of few authors who have been as committed to their subject as these two have been. They knew from the get-go that they just HAD to do this book and they started doing it, long before they had a publisher, a deadline, a contract–any of the usual sorts of things that get most of us motivated.

Anyway, it’s a lovely book, and the two of them have really become part of this community of flower farmers who are into local, organic, fresh, seasonal–all the things we love about flowers.  In this guest post, David writes about his own crazy publication date experience, but I have a feeling that for these two, the pub date is only the beginning, not the end, of their journey through the world of home-grown, sustainable flowers.

Here, by the way, is a nice piece from David in Huffington Post, and here’sDebra in the New York Times.

But now, here’s David on his pub date adventures–and read on for a chance to win a copy of the book.

I like to goof around and tempt fate as much as the next guy, but I swear it was not my idea to have our book’s release date coincide with April Fool’s Day. Still, when those pesky, publishing world dice were rolled, when that auspicious pair of numbers, “four and one,” came up, it did seem to me that there might just be a silver lining shimmering there within the odd mystery of it, somehow.

When you think about it, Debra and I had been rolling the dice, gambling with our time and our own money, trying to get this emerging story told from the get go. For more than four years we stubbornly kept on, even when certain, ‘in-the-know’ gatekeepers who shall remain unnamed, kept telling us, over and over, that we were crazy. So really, why would either of us have started expecting ‘conventional’ or ‘normal’ at this stage of the game?

I decided to embrace it.

After delivering a signed, thank-you copy of The 50 Mile Bouquet to my dear friend, flower farmer, Jan Roozen at the Ballard Farmer’s Market (Jan is featured in the book on pages 52-53), I made my way to one of Seattle’s favorite landmarks, the Fremont Troll.

It’s important to understand that though the beloved Fremont Troll has been living boldly under the Aurora Bridge since Halloween of 1990, he lives within our hearts and our imaginations, as well. So who better, really, to call upon? Who better to entreat for help in celebrating the April Fools tie-in to our official book-release date?

I had been entertaining thoughts of trying one of those elaborate, good ju-ju incantations to get the troll’s attention, and had been going over the particular steps, again and again in my head. But as soon as I arrived and looked around, I abandoned that notion as just a little too ‘crazy’. Too many other eager supplicants who had made their own perilous pilgrimages from neighborhoods like Queen Anne and Ravenna, and White Center. And then there was that strange couple from Madrid who kept making out while she fondled the troll’s enormous nostril for the benefit of their friend’s camera. Add to all that the realization that I simply could not remember whether one is to properly swing the chicken clock-wise, or counter-clockwise over one’s head and you begin to understand why I decided it would be best to just sit quiet and wait for a sign.

Thankfully, I wasn’t the only poor soul who didn’t understand the finer points of karmic hen twirling, for in the hour that I stood there waiting, nary a chicken was to be seen hurtling about in euphoric circles, and this on April Fool’s Day, no less.

Still, there was a pair of teenage kids who arrived with two, camera-wielding mom-types in tow, and despite their lack of a proper chicken, I simply could not ignore just how much fun they all seemed to be having taking each other’s pictures with the troll and laughing. They immediately seemed like my kind of people. However, I was a little concerned that they might not see me as ‘their kind of people’, so I approached them slowly and cautiously, holding a flawless, new copy of The 50 Mile Bouquet at arm’s length in front of me, looking directly into their eyes and speaking in calm, reassuring tones while introducing myself by name.

“Hello…” I began, timidly, trying not to spook them.

When I explained that I hoped they’d help me celebrate the auspicious, first day of April, which was also our new book’s birthday, by enacting, perchance, one small, slightly rewritten scene from that recently released, Hunger Games movie, with young, Sammy volunteering herself in tribute, then reading aloud selected passages from The 50 Mile Bouquet, including excerpts of the Floral Gospel According to Jan Roozen, which pronounces the abomination of putting daffodils in the same vase with tulips, unless there is a baggie involved. She would do all this, I explained, while she sat upon Joey’s back, as he knelt in front of the giant troll.

Well, duh, you didn’t have to explain it to these folks twice. They too could see, almost immediately, that we were all birds of a similar feather. The kids looked to the adults with eager nodding faces and puppy-dog eyes, and the mom and the auntie looked back at me and smiled. We apparently had a deal. 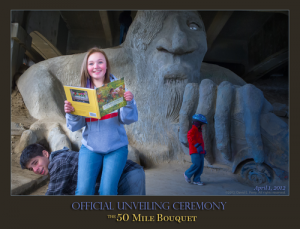 By now you may be wondering where I’m going with this.

I relate this story to you because, as one of the proud parents of a newly published book, I feel a duty to relay some of what I have learned during its long gestation.

You really can’t ignore any realm of existence any more as you navigate that winding road toward a book’s birth, even down to appeasing immense trolls and inviting complete strangers to help you entreat the powers that be, and celebrate the great mystery that is getting a book published.

These days it’s not enough to simply be good, to merely create the essential elements for a book, to catch a glimpse or a dream that needs to be told. It’s not enough to refine your pitch to the point that you can explain your premise in five sentences or less, while still maintaining some of its poetry, or to hone and organize your sources, or to gather those many, essential story threads from life’s four winds and then weave them all together into an enlarging and compelling narrative.

It’s not enough to shoot more than forty thousand photographs from which you’ll only be able to include a hundred and seventy six, or to make your peace with the fact that several of those included won’t necessarily be your ‘best’ images on a particular subject, or even your favorites, but trusting, instead that they will be what is best for a particular page or spread, or story-informing spot.

It’s not enough any more that the pictures in a book simply be beautiful. They need now to also to be great communicators, team players and nuanced elicitors of emotion.

When you see all of these things come together, when you witness the diverse players on a story’s birthing team, from the brave publisher to the wise editor, to the visionary designer and its original creators, all managing to avoid those numerous pitfalls that inevitably rise up, emerging somehow, whole on the other side with their completed tale, you then behold what we readers, we loyal, page-turning, goofball lovers of story refer to as a “book.”

And these books, my friends, they are not easily born.

I invite you, finally, to meet ours, to gaze upon its faces, to immerse yourself within the stories of America’s emerging local, seasonal and sustainable flower movement. Allow us introduce you to wondrous designers and courageous flower farmers. Meet ardent, soulful gardeners. Look into their eyes, gaze upon their creations and be amazed as we have been amazed.

Welcome flower lovers. You’ll find that you’re among friends here.So!  People!  To win a copy, post a comment about the thing that is blooming (or leafing, or branching, or rooting, or climbing or living or dying) in your garden RIGHT NOW that is most worthy of putting in a vase today. Have at it!