Landscape architect Thomas Rainer (whose blog Grounded Design I’ve raved about) recently spoke to a rapt audience at the National Arboretum’s Native Plant Symposium, addressing the big question – how to create a native-plant garden that looks like a garden.  You know, cared for and pretty.

So first he clarified that he’s no typical landscape architect but a true plant nerd. (Does he garden after dark?  Check.  Stay awake at night thinking of plants for his garden?  Check.  Et cetera.)  He’s also not a native-plant purist, but native plants DO resonate with him spiritually, answering his longing for nature, what we’ve lost and are rapidly losing.

Thomas went on to complain that Americans treat nature like Victorians treated women – as either virgins or whores.  Just Google “Yard of the Month” to see the nature-free yards that are held as the ideal, visions of which drew groans from the nature-loving audience.  But with so much of our land now developed, nature is no longer something that happens elsewhere.  We need to make room for it in our very own yards.

So, what’s the existing “design aesthetic” for native plants?  Thomas believes that in reaction to that “Yard of the Month” style we love to hate, native gardens overly embrace the wild look in their attempts to imitate nature.  While he loves naturalistic design as much as the next guy, he thinks the resulting gardens look weak and sloppy.

And sadly, our enthusiasm for wildness makes us our own worst enemies.  Most observers, including our neighbors, just don’t think the wild aesthetic is appropriate.  Gardens designed to replicate habitats are so often on too small a scale to look good, causing viewers in the general public to see them and ask, “Where’s the garden?”

Getting feedback like that and attempting to remedy the situation, the NY Botanic Garden is totally re-doing their habitat garden with the help of Oehme van Sweden, the famous firm that employed Thomas before the recession (he’s now with another well respected firm.)  To avoid design failures like this, he uses what he calls the mother-in-law test – would his mother-in-law like this, recognize it as a garden?  If so, then it’ll probably be accepted by the public. 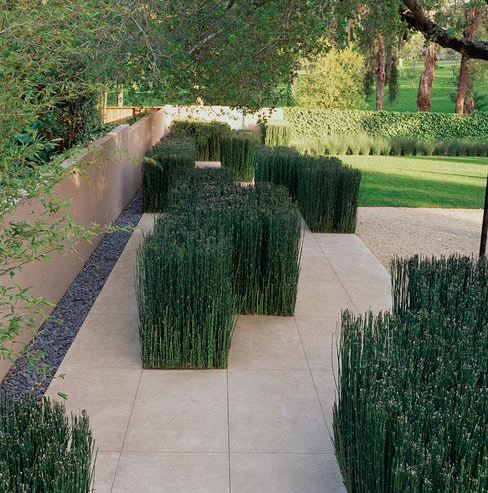 So here’s what Thomas recommends to native-plant lovers who care about design and want to win converts to native-plant gardening.  Create contemporary, abstract designs that interpret nature artfully.  Rather than using plants on a small scale, “Turn up the volume!”  Distill and amplify the plants’ features.

Start by choosing an analogous plant community for the site (one with the same characteristics as your yard).  Google “DNR natural communities” and your state name for ideas. Pick the most important three or four plants from that group.  One inspiring plant community for the Mid-Atlantic might be the Dolly Sods Park in West Virginia (below), where a dominant plant would be the Little Bluestem grass. 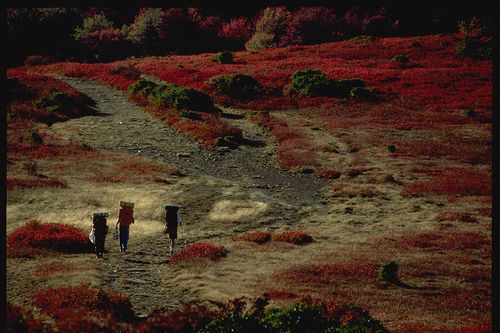 Then create a short list of the patterns you see those plants making in their natural setting.  And voila – using abstraction and the dominant species with the volume on high, you have a garden that’s simpler, bolder, more architectural – a garden.  “It sells itself!”

An added benefit is that large masses are easier to maintain than small groups of many different plants.

A great example of this style of native-plant design is Gary Smith’s design for Peirce’s Woods at Longwood Gardens, which uses thousands of tiarellas, maidenhair ferns and Christmas ferns to glorious effect.  It’s not an imitation of an Eastern forest but a bold interpretation of one.

In a follow-up email I asked Thomas how this type of design could work in a small garden:

With small urban spaces with no clear reference (or adjacency) to a native plant community, you’re free to “import” almost any native plant community to stylize and adapt. The important thing is that the garden evokes a moment in nature, something it wouldn’t do using a traditional horticultural approach.

As to how, massing might be appropriate, but not always. In a small site, you might get legibility and spirit through repetition of species, color, or texture, not massing. The important aspect is that you’ve edited the community of inspiration down to the visual essence species. This is what creates the link to the larger site.  As an example, I think Tom Stuart-Smith’s Laurent Perrier garden in the Chelsea Flower Show is perfect. It’s not a native garden, but it accomplishes exactly what I’m advocating for. In size, it’s not much bigger than a townhouse backyard. But he picked a palette of plants that FEELS like a fairy-tale woodland. A clearing in the woods. The umbel-laden forbs nodding under a grove of birches is a perfect example of distilling a palette down to a few plants with maximum emotional impact.

I’ll have more from Thomas coming this afternoon in another post – his “Myths about Native Plants”. 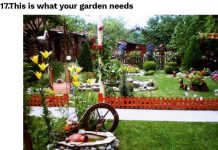 These “Inspiring” Gardens are Hilarious