Like many of you, I stopped watching garden shows on HGTV when they effectively dropped the “G”.  But during my recent adventure in the buying and selling of houses – one each – I watched their real estate shows like a crazywoman.  Could not get enough of them, as fake as they seemed.  Especially fake-seeming is the formula of presenting all homeowners having to choose between just three, and exactly three homes, to fit into half-hour segments, I suppose.

Still, I felt like I was picking up bits of useful information about what people want in a home they might buy.  Like granite countertops – the absence of which sends some potential buyers right back out the door.  And another, more disheartening one – that the absence of a yard or even a tree or two is often seen as a good thing.  I’ll never forget the alarm on one shopper’s face at the sight of a tree-filled back yard.  “That means bugs!” she shrieked, before instructing her realtor to focus on high-rise apartments, which is clearly where she belongs.

And kinda fun, though not helpful, is House Hunters International, which showed me what a million bucks U.S. will buy in New Zealand.  Turns out, surprisingly little.

But back to the fakiness of HGTV’s real estate programming.  One hard-working blogger did some actual legwork – like real journalists sometimes do! –  contacting people whose real estate dealings had been featured on HGTV, and told the sordid results in her story “What it was like to be on the show“.  Among her discoveries was that HGTV will wait until a buyer has already finished with their shopping and closed on a house before choosing them as a supposed home-shopper.   Then to film the episode, the so-called shopper “had to scramble to find houses to tour and pretend we were considering.” Some of the properties weren’t even for sale; they were homes of friends.

The blogger found these other “truth about” stories behind the curtain that is HGTV:

Notice that last link is about a gardening show?  Okay, yard, but close enough.  Yeah, turns out they still have two of them, more or less – The Outdoor Room with Jamie Drurie, which admittedly may be more about furnishing than gardening, and Yard Crashers with Ahmed Hassan, who’s not just good-looking and personable but an actual landscaper.  Seems he’s being quietly replaced – with no explanation – with a “licensed contractor“.   Why are we not surprised? 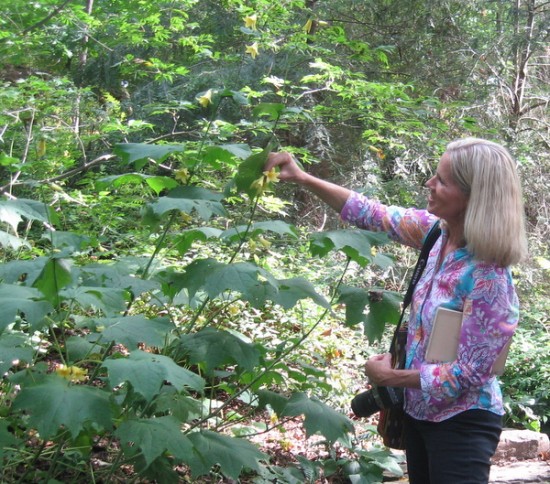 Revisiting the wasteland for gardeners that HGTV has become makes me nostalgic for the relatively good old days of gardening on that channel.  Remember the goofy but damned knowledgeable (and organic) Paul James (shown here dining in Baltimore)?  Remember the wonderful in-depth garden tours and interviews that actual horticulturist Erica Glasener did on her show “Gardener’s Diary”? (Shown here in a photo also taken in Baltimore.  See, there used to be TV hosts worth driving up I-95 to hang out with.)

Well, at least Hulu is still showing us some of Erica’s wonderful episodes, just a few at a time, but they rotate them.  Click here and weep.