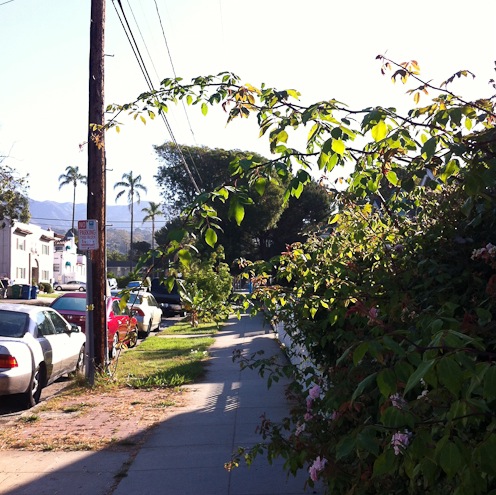 It was a dark and foggy summer night. Biff the Wonder Spaniel and I set out for our last neighborhood stroll, green poopy bag at the ready. It’s a good thing I didn’t have my nose buried in my iPhone, catching up on the four games of Words With Friends that Lin and I usually have running. If I had been distracted, I’d probably be sporting stitches, or worse yet, a ripped cornea.

Through the mist, I realized I was one step away from facial lacerations from a thorny rose branch arching across the sidewalk at eye level. That’s what can happen when someone plants a Cecile Brunner climbing rose on a picket fence that butts up against the sidewalk. Seems to me, you’d have to be either stupid or heartless to think you can plant a 25-foot climber a couple of inches from your property line and then let it run wild. Good thing poison oak isn’t an ornamental.

Thorny plants are the worst-case scenario, but it seems everywhere I look, somebody’s fuzzy bush is in my face. I’ve got no beef with a property owner planting this stuff along their own walkways, but when half of a public sidewalk is blocked by some thoughtless, lazy gardener’s weekend project, I get pissed off. 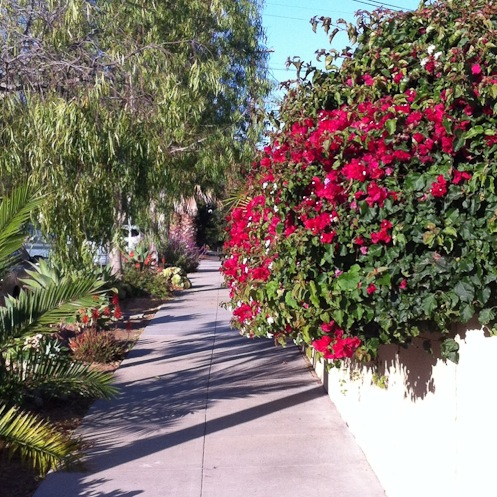 One block from my house there’s a wall of ivy climbing something (it’s so dense I can’t tell if it’s an old chain link fence or remnants of an ancient civilization) and taking up more than half the sidewalk. A few blocks away, crimson bougainvillea sporting inch-long spiky thorns spills out from a raised wall. Pretty? Yes. Neighborly? Hardly. Legal? No way. Arrogant and lazy? In the words of Sarah Palin, “You betcha.”

Assuming that the owners of these properties are aware their plants are blocking public right of way, I can only assume that they rationalize with “I can get past, so why ruin my weekend doing chores?”

What about a mom with a stroller? What about someone like my dad who uses a walker and is legally blind? 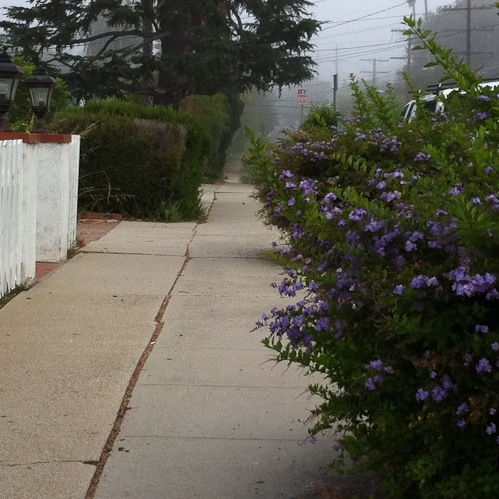 The image above show this week’s Two for the Price of One Special: Brazilian skyflower (Duranta species) in the parkway – some varieties reach 20-feet high and wide – and rosemary creeping in from the garden. Great for an Olympic slalom run, but vexing for someone with mobility problems. 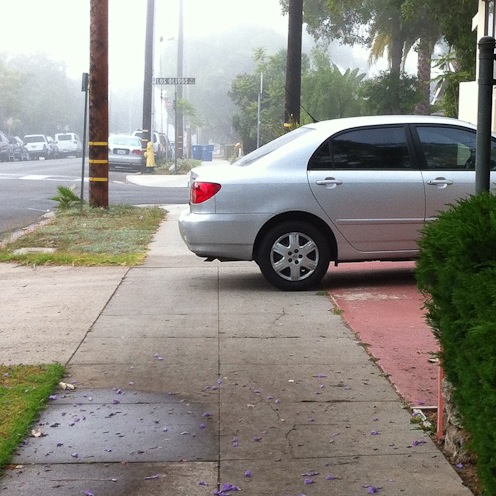 Two blocks away on one of the main Santa Barbara thoroughfares, where I’m sure curbside parking is at a premium, some numbnut who won’t clean out their garage left their big fat tail end blocking the walk. All that’s missing is a middle-finger decal over the wheel.

Bonnie Elliott is a friend who spends much of her waking days in a power wheel chair. She’s also been active on the City of Santa Barbara’s Access Advisory Committee, reviewing submittals that go through the Planning Commission and offering recommendations to make new projects safer and more livable for a wider cross-section of the community.

“That overgrown crap shouldn’t be there,” Bonnie told me, as we sipped ice teas and devoured divine pistachio macarons on a warm afternoon at a local patisserie. “Some hedges make it impossible for drivers to see anyone on the sidewalk when they pull out of their driveways. You can’t see them and they can’t see you. There’s no way you can achieve ‘escape velocity’ when a car suddenly appears.” 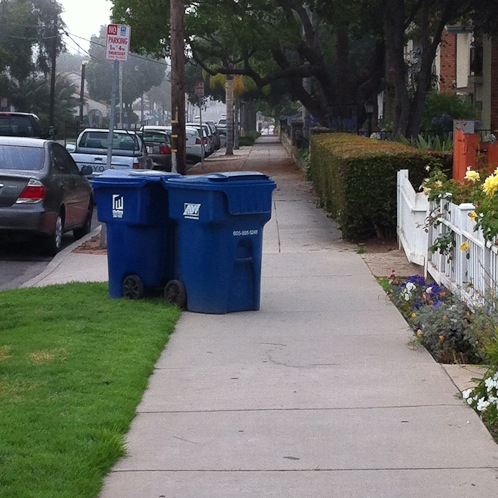 As long as we’re talking about public sidewalks, what about those trash/recycling/green-waste cans? This morning, I hauled one filled with brush and bamboo, plus a blue recycling bin, off the sideway, left there, no doubt, by an indifferent, hasty homeowner. Sometimes the bins are empty, meaning that an in-a-hurry trash collector picked up the load, dumped it in the truck and ignored the company policy laid out for me by Tito Escarcega, supervisor for the local service: “We hammer the guys: do not leave the cans near mailboxes, near driveways, or on sidewalks. But I’d be lying if I said that a few of our boys don’t slip up once in a while.” I know these guys are generally on top of it and do awesome, back-breaking work, but there are a few slouches who need to appreciate the bigger picture.

If you’re in a wheelchair and there’s no way around an obstacle, many times the alternative is a detour down a sloping driveway and out into the street. Bonnie recounted a recent incident when she was almost hit, the driver slamming on the brakes just in time. 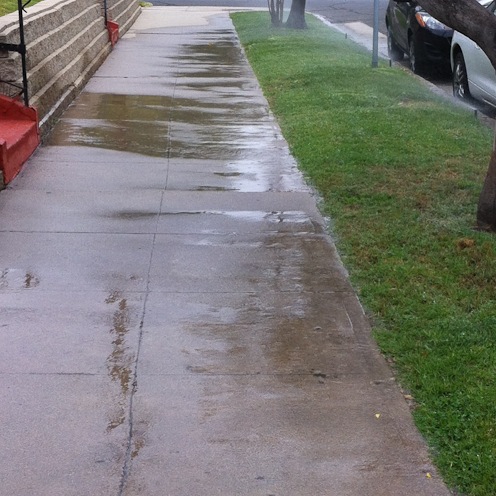 While I’m at it, what about sprinklers that go out of whack, showering passing pedestrians (and hydrophobic cocker spaniels)? It’s bad enough all that water is missing its target and flowing to the gutter, but no one should need a snorkel to take their exercise stroll.

Am I getting through? I love gardens. I make my living designing, teaching, writing, and ranting about them. But your right to grow a garden ends at your property line. Any time you buy a shrub you intend to plant near public walkways or streets, it comes with a duty to know its potential size and either give it plenty of room to do its thing, or be conscious and considerate enough to keep it the hell out of everyone’s way. If that means giving up a few hours on the weekend, or increasing your gardener’s hours, bite the bullet.

If you’re as fed up as I am with this stuff, do as I do and rat out your neighbor. I don’t start by calling out the big guns. In the case of the errant rose bush, I left a note on their door (including my phone number – I’m straight up about it) and the next day I got an apologetic phone call and the rose was pruned. Encroachments into public right of way can usually be reported to the zoning division for your town. 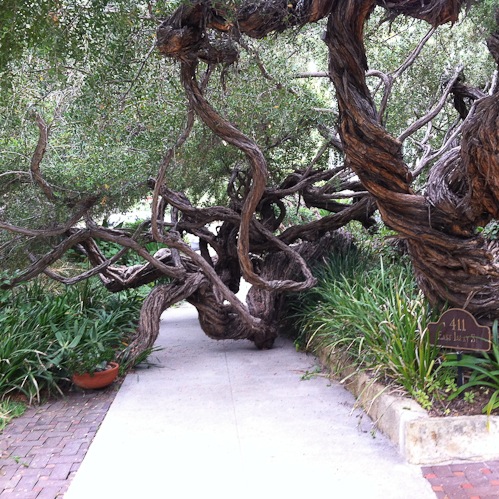 But I’m making one exception. Around the corner from a friend’s house is a magnificent specimen of Australian Tea Tree (Leptospermum laevigatum) slithering across the sidewalk in all its muscular glory. Although there’s no way around it, the City Arborist fought to have it preserved. So the thoughtful owners have constructed a stairway leading down to the street so neighbors can get around. I’m cool with that.

Billy’s garden design book, “Yards: Turn Any Outdoor Space Into the Garden of Your Dreams,” will be published March 2013. Visit his website, billygoodnick.com, for a preview and pre-ordering links. 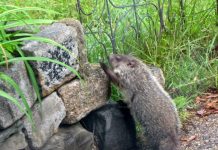 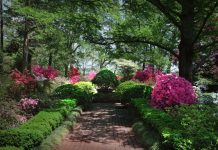 Advice on When to Prune Shrubs – Mostly Wrong?