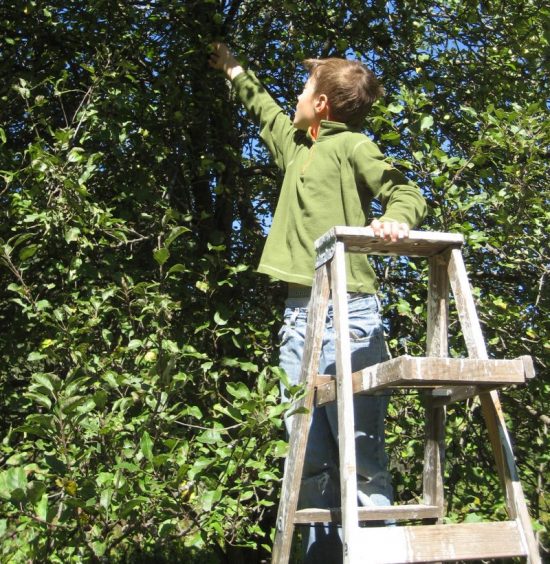 The Fedco Trees catalog has arrived, and once again I find myself failing to pay any attention to my children and job.  The Fedco catalog is not just informative, it’s entertaining, and so are the hundreds of different fruit trees it offers. I prefer ordering fruit trees from catalogs to buying them in nurseries. They are much less expensive that way, they tend to be much healthier, and you have your choice of varieties, including ones that are probably better suited to your climate than what Home Depot is offering. I’m lucky in that the Maine-based Fedco’s recommendations–and big, beautiful stock–work for me in upstate New York.

Over the course of my gardening career, I’ve purchased dozens and dozens and dozens of fruit trees–and gotten fruit off of almost none. Fruit trees seem to operate on a time-scale that foils me. It can take years before you realize you or the nursery has made a mistake–and then another full season to replace any mistakes, since the catalogs generally only mail their bareroot stock in spring. It can take years under the best of circumstances for the trees to yield any fruit. Deer nibbling can set the trees back so that they never mature. Fruit trees require not just patience, but a commitment to one’s real estate that I seem to lack.

Here is my tale of hard luck and ineptitude:

Apples: A few years after moving into my first house 20 years ago, I cleared a little patch of woods and wound up with a really nice flat meadow for apple trees. I went to a local nursery and bought a bunch of semi-dwarf apple trees. They sat there in the meadow for about five years as if inert: Wrong varieties for the climate, wrong rootstock, poor cultivation in the nursery? Somebody suggested ordering trees from a specialist in cold-hardy varieties, St. Lawrence Nurseries in Potsdam, NY. St. Lawrence is another favorite source of mine, and THOSE trees actually grew, but I moved before I got any fruit.

I moved, in fact, to a place in the country that was loaded with cow apples–in other words, seedling apples whose journey to maturity included the digestive tracts of cows. Most of them fruited only biennially, but they produced bushels and bushels of beautiful apples. Though some of them generated sweeter fruit than others, on the whole their fruit was not very sweet, but that worked for me, since I like tart apples to eat fresh and prefer tart fruit for pies. Since I wasn’t thinning the fruit, the apples were small. My kids would pull out a mechanical apple peeler that amused them and helped me prep the numerous apples required for a pie or two. My feeling here is, score one for Mother Nature.  Cow apples are great. No sprays, no diseases, no fretting on the part of the orchardist required.

Pears: I think ‘Seckel’ pears are one of the most delicious things on earth.  Since pear trees can get very large, I’ve always planted them in wildish meadows rather than in the garden.  They have invariably been eaten off by deer in their first winter. I’ve tried chicken wire cages, but could never make a cage sturdy enough to discourage the deer. I’m sorry, but YOU try burying chicken wire in a meadow full of goldenrod roots.

Plums:  I have very fond memories of pulling sweet blue European plums off a tree in the churchyard in the Bavarian village where my mother grew up, and I have very fond memories of the plum tart my aunts would make with them.  So I planted a row of plum trees just outside my garden fence in the country. The deer found their little branches so delicious that in six or seven years, they never grew beyond sapling size. I finally moved two of the trees to my city front yard in Saratoga Springs, right beside the porch.  They seemed to like the sandy soil and sprang to life…only to get black knot disease.  Two years ago, I replaced one, last spring I replaced another.  The new trees have black knot. I have now given up on European plums. Apparently, only the variety ‘President’ is resistant to black knot, and you need two varieties for pollination.

Cherries:  At my erstwhile country place, where sweet cherries are not hardy, I planted four pretty little ‘Northstar’ pie cherry trees, described as “natural” dwarfs, in my vegetable garden. By its second year, one of the four had a trunk six inches in diameter and was 12 feet tall. Clearly mislabeled! I sawed it off and replaced it. It was late in spring when I made this decision, and the only nursery still shipping ‘Northstar’ was a commercial nursery I don’t ordinarily patronize.  Their ‘Northstar’ tree kicked the bucket over the course of the summer.

This June, as I was just about to sell that house, I noticed lovely sprays of fruit developing on the three remaining trees.  Sigh. Never got to taste one.

A few years ago, I also planted two sweet cherries in the city, at the edge of my new vegetable garden.  I chose a variety called ‘Lapin’ from a nursery that described it as “compact, a true dwarf.”  Hmmm. Other nurseries say ‘Lapin’ reaches 20 feet. Even in their first year, my trees were giving that “compact” notion the lie, shooting up way tall. Now I’m afraid that unless I stay on top of them with my loppers, they will shade out my vegetable garden.

Apricots: Another tree whose size in my city yard is slightly worrisome.  About five years ago, I planted a variety called ‘Puget Gold’ on the north side of my house, where it is shaded in early spring and thus discouraged from blooming too early. Fedco says all their apricot varieties are self-pollinating. But for the last two years, I’ve watched the tree produce a million tiny fruits–and then shed them all in a mass miscarriage.  I’m no expert, but this at least appears to be something genetic. So, this summer, I saw the fruit drop in late June, thought “I need a pollinator,” and on impulse, drove to one of the best nurseries near me, Mettowee Mill Nursery in Dorset, Vermont, where I bought a really big ‘Moonglow’ apricot tree for $62.  I planted ‘Moonglow’ at the far end of my chicken yard.  That tree is so happy there, rooted in sandy soil with a steady snowfall of chicken manure, it is practically smiling.

Peaches:  Ah, now we arrive at my one real success. Peach trees are very precocious: Plant them one spring, and you will get fruit in the second.  They are pretty: I love their long, lazy, almost tropical looking leaves.  They really like the sandy soil I have in my city yard.  Their fruit is ridiculously delicious.

Possibly too delicious!  Peaches seem to attract an interesting type of Saratoga dweller, the super-entitled and aggressive lady in her 60’s.  We have problems with these pests in our school garden, too, where my partner and I and the school principal are constantly having to chase them out while they argue that they are perfectly justified in robbing our garden club because they pay taxes.

They are funny, these women…until they steal every last peach from your hell strip, as they did to me this year.  I woke up at 7:30 one morning, just as everything was about to be ripe…and there was not a single peach on a single tree.

I am trying to trim the biggest of my trees up so that next year, it takes a ladder to get the fruit. We’ll see if that confounds the kimono-clad woman my neighbor sees helping herself to my peaches.

A murky future:  Am I giving up?  Have years of failure and a raft of dead trees discouraged me?  Will the sale of my country place and the strange situation I find myself in of being confined to a yard of 7500 square feet curb my purchases? Will the Fedco Trees catalog go in the trash, where it probably belongs, along with Architectural Digest and Garden Design and all such literature of fantasy?

Absolutely not!  This year’s order: A few pears–let’s see if I can keep trees that reach 100 feet in the wild pruned to ten in my yard.  A few hybrid plums that are not susceptible to black knot.  And a few apple trees.  I have no idea where I’ll put them.  But a very, very beautiful tree in my opinion, and at $25 apiece, a relatively cheap dream.