Last week I posted garden designer Susan Morrison’s lovely hand-drawn plans of my cocktail garden, which she designed in response to my desperate plea for help. You can see the final results in the February issue of Sunset magazine, but maybe you’d like to see where we started.

Because I am a big believer in showing gardens when they look like crap, not just when they look great, I searched around for the absolute worst photos I could find of this narrow side yard. This is one of those awkward spaces sandwiched between my kitchen door and my neighbor’s house. It was really the only spot that would work for a cocktail garden–we have chickens free-ranging in the back and fencing them out seemed too complicated, and  the front yard was too exposed. That left this space, which is great because of the access to the kitchen, but awkward otherwise.

Here it is, in all its unweeded horribleness, from the front: 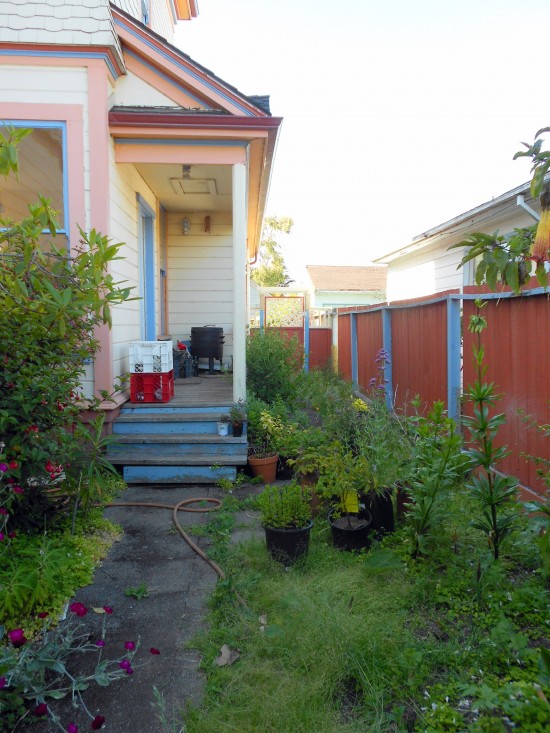 And here is more unweeded horribleness from the back looking toward the front: 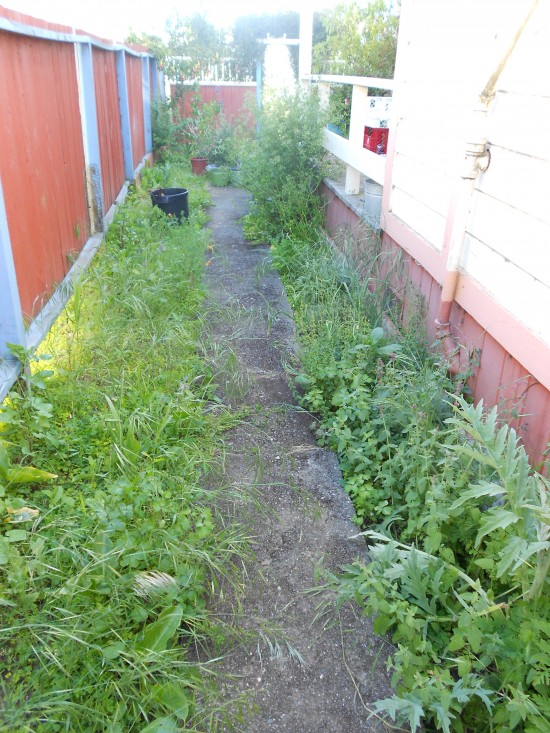 This is the highly inaccurate and confusing diagram I sent to Susan, who lives six hours away and had to design the garden without ever visiting it: 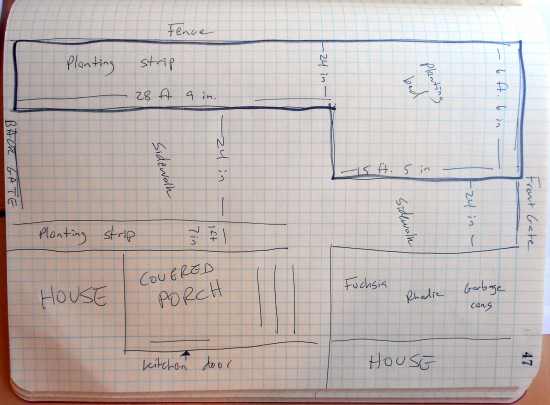 and here is the totally meaningless sketch I sent, which was supposed to convey my ideas for the garden, whatever those were.  Basically, I was trying to convey the idea of height and vertical gardening and bar-like drinking/hangout spaces, and also the idea of painted wood containers, because I live in a neighborhood of painted wood Victorian houses and it wouldn’t make sense here to do stone planters or Italian pottery or anything like that. 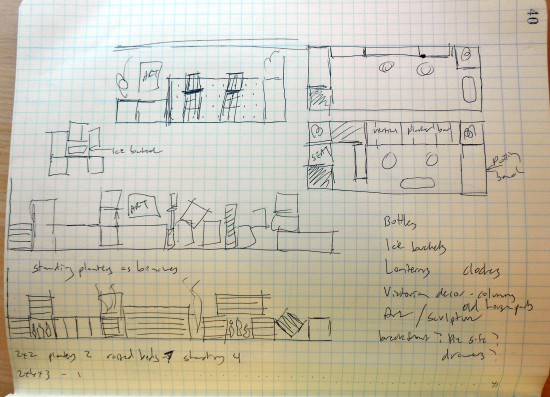 Here’s what I got back from Susan, after much discussion: 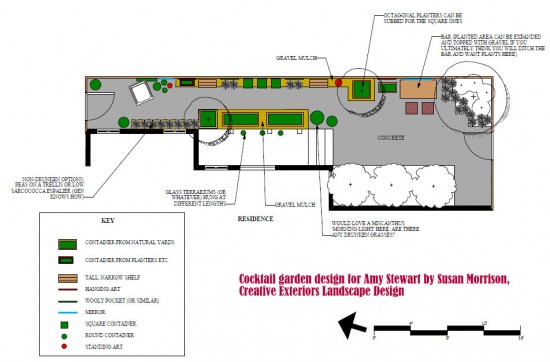 I knew I needed to replace the fence, which was on its way out anyway.   I was also willing to replace the concrete walkway, which was very old and cracked and uneven.  So Susan greatly expanded the concrete, which not only made for more of a hangout space, but it gave us a place to park the ridiculous oversized trash and recycling bins we’d recently been issued (lower right in this plan), which could be wheeled away and replaced with a chair for parties.  Expanding the concrete also got rid of the “bowling alley” effect (or at least reduced it) by making the garden more viewable from various angles, not just front-to-back.

What happened next?  I hired fence guys, hired a concrete guy, and hired a guy to make wooden planters. I saw some of his planters at a local garden center and they put me in touch with him.  He used to work at one of the mills (this is timber country up here, folks) and had access to second-grade wood at a good price.  He made me 13 containers in all, including the raised planter-turned bar you’ll see in a minute.

First, this thing showed up.  I picked a warm, natural color called Goldenrod from Brickform. This color was specifically chosen to match a color scheme I’d carefully selected with the help of a local professional who has never steered me wrong.  I then rejected the entire color scheme, but only after the concrete was poured and I had applied said scheme to the fence and most of the planters.  But more about that in a minute! 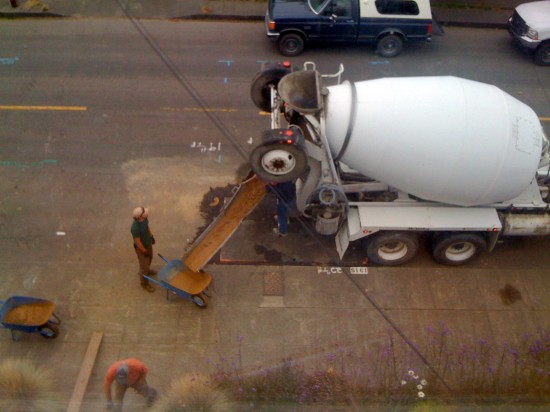 Okay, so that happened!  Then the fence went up, and I paid someone to paint it a color that I later decided was all wrong.  The guy I hired had already moved on to another job and could not come back, so after sensibly paying him to paint so I could do my job and earn the money to pay him, I then had to take a few days off my job and paint over it myself!  Yea! This is the wrong color, which was way too bright: 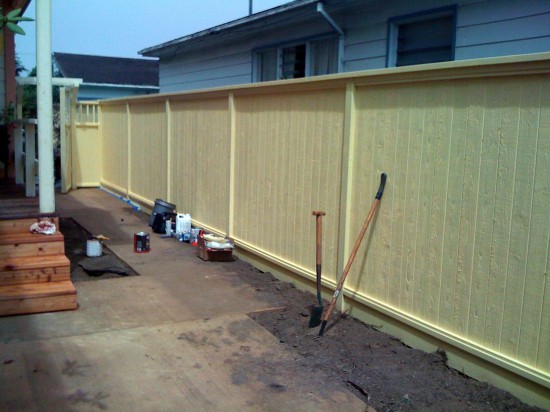 Then the planters arrived, and they had to be primed, except for a few that I intended to stain.  I didn’t want the garden to look like a box of crayons–I did want some neutral colors (apart from the greenery, which really does serve as a kind of unifying neutral color).  So I intended to stain the wood steps of my porch, the planter/bar, and a couple of other things so we’d have a combination of wood and painted wood. 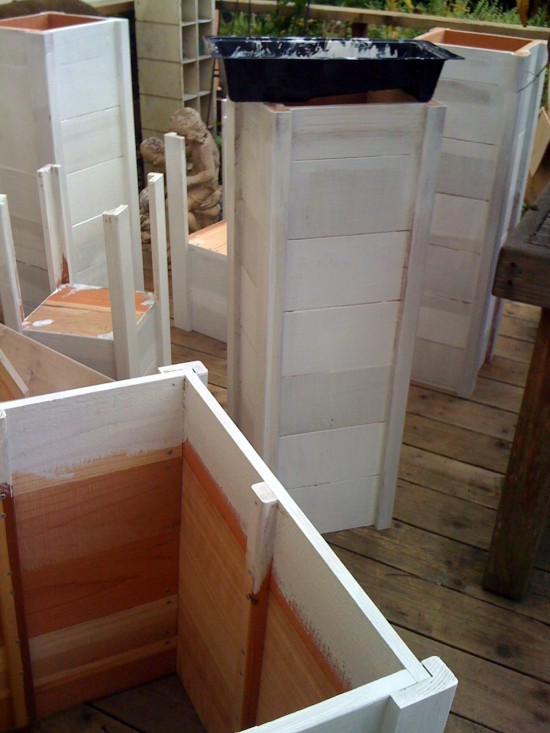 I thought it would help to set the planters in the garden and just see how they filled the space.  That Most Definitely Did Not Help.  It terrified me. The whole thing looked like crap and I was getting seriously worried that I’d gotten in over my head.  Also, it was taking much longer to paint everything than I’d counted on.  And did I mention that my helper was gone?  I tried to hire more people at the last minute–didn’t happen.  In all, I probably lost about 3 weeks (of time I could have spent doing work and earning a living) to this project.  Ouch. 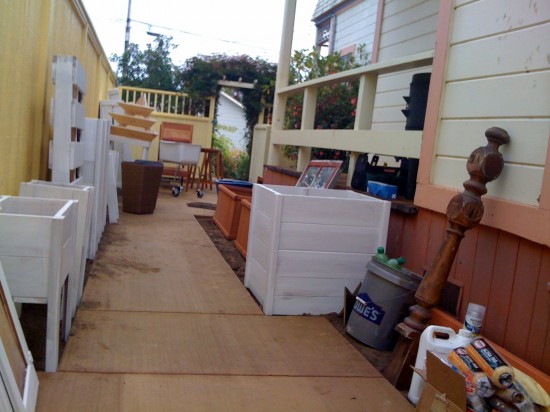 Even seeing my cool planter/bar in place did not help. 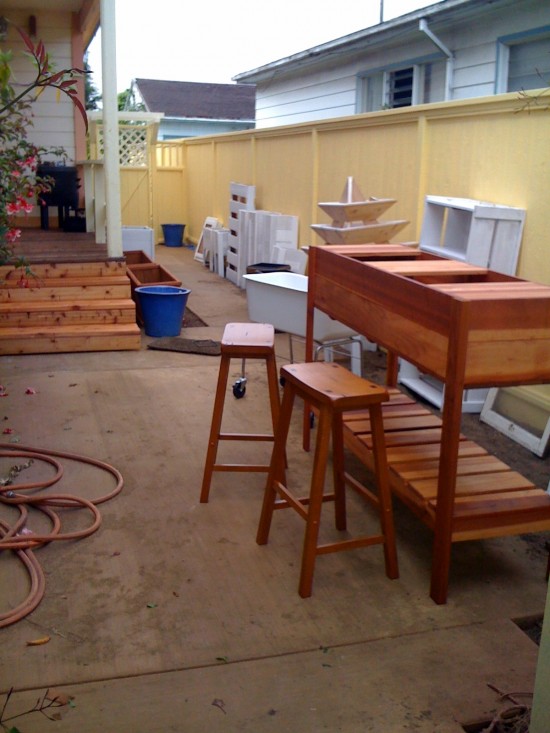 Then this happened.  I’d been saving bits of Victorian house trim to attach to the planters.  My idea was to make the planters feel like they belonged with the house by working in some architectural salvage, and I also thought that I’d paint all the trim a contrasting color, so it would really very much tie into the whole West Coast painted lady thing.  But none of the colors were working  (I don’t have photos of all the non-working colors, but they were just too bright.  The place looked like a garden for toddlers, not for adults drinking gin late at night.)  So I kept going back to the paint store and buying darker and darker colors.  Finally I ended up with an assortment of colors that looked almost black on the paint chip.  One of them was this Glidden Black Bordeaux. 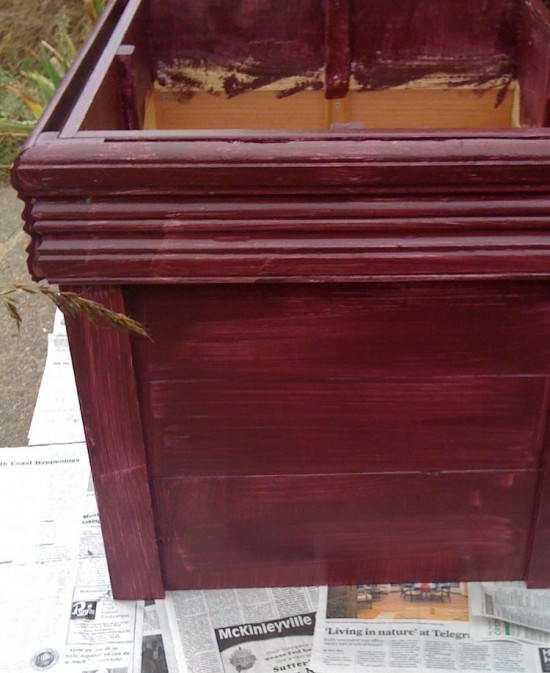 That was it!  Then I had it.  The trim would be painted the same color as the planter boxes, which reminded me (in a weirdly appealing way) of a creepy old house whose rooms are painted all one dark, intense color, even the trim.  There’s something cheap and tawdry about it.  I was delighted.

So at that point, I went back to the paint store and got the darkest versions of purple, blue, and burgundy I could find.  All of them, I realized, perfectly matched the colors on liquor bottle labels.  THIS is what I was going for!  It was more French Quarter than northern California.  I also picked out a sophisticated pale blue and pale green–think pastis, absinthe, and Chartreuse–as contrasts. I stained the wood the darkest color available, and painted the fence a much more neutral cream/mustard yellow. 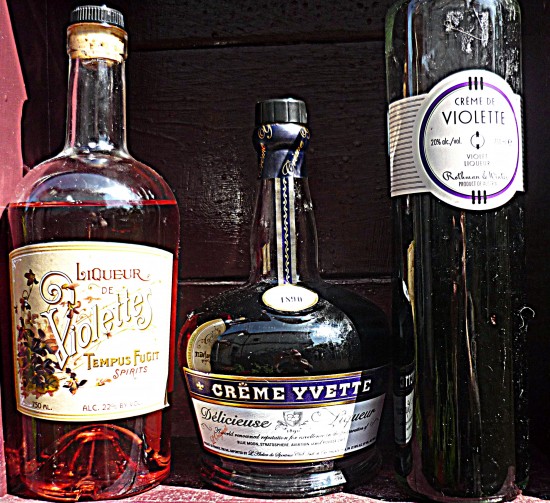 Then I borrowed parts of an old copper still from a friend of mine who admits that it looks so good that she might never get it back.

Then the plants arrived, thanks to Log House Plants. (They are a wholesale nursery, by the way, so look for their plants at garden centers, but if you’re wanting to order cocktail garden plants online, instead try Territorial Seed Company, who Log House supplies) 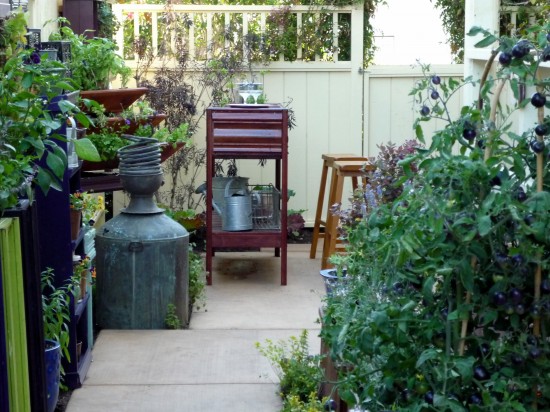 Okay!  That’s it!  I’ll show a few more “after” photos next week with more details.