I was reluctant to make the schlep into D.C. to attend DC’s Home and Garden Show, which (like HGTV) deserves a silent G for its dearth of garden vendors.  But the show DID have the good sense to book a talk by someone I’d wanted to meet for a long time – writer/farmer Barbara Damrosch, whose Garden Primer we’ve raved about here.  (And we loved this New York Times profile of Barbara and husband Eliot Coleman’s Four Season Farm in Maine.)

Barbara was just coming off six weeks of traveling to promote their Four Season Farm Gardeners Cookbook, out this year.  Over convention-center food, she patiently cited the basics of her bio (studying medieval lit, teaching college English, writing for the Village Voice and others, doing garden design professionally before settling down to farm – and write about gardening). 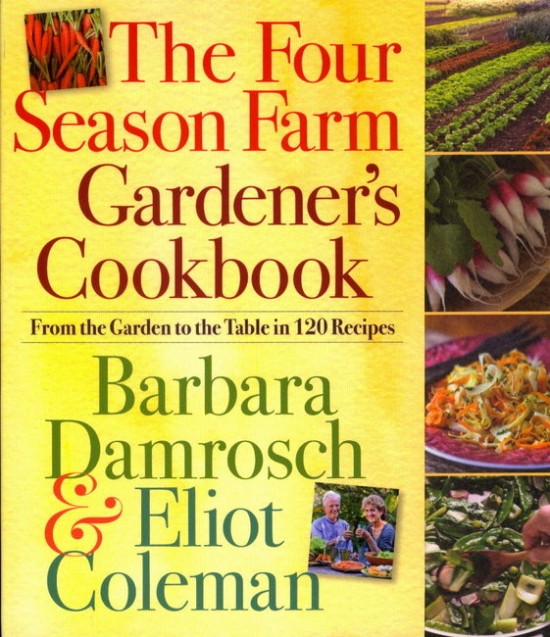 All of which I could have learned on my own if I’d been a better prepared blogger.  Preparation might have also included reading one or two her Cook’s Garden columns in my local paper, or knowing anything at all about growing food.  Or cooking food.

But I can ask about issues important to Garden Rant readers, like:  Did she and Eliot notice that he was the consensus winner of our Sexiest Man in Gardening contest way back in 2006? (Here, here and here.)  Yes indeedy they did and read the commentary aloud in the staff lunchroom to great hilarity.

But for me, the big take-away from lunching with this warm and savvy woman was how young she seems, despite facing the big 7-0 this year.  (And get this – Eliot’s 74!)  Aging-while-gardening is a big issue for me so I listened up when she described her long work days, even long days of physical work, with apparently no injuries.  So, what’s her work-out routine?  Just gardening, which she says has kept her “young, though not as strong.”  So except for not being able to lift as much poundage as she used to, she hasn’t slowed down at all.

Let no one be misled by her petite and pretty appearance; this lady’s a farmer.