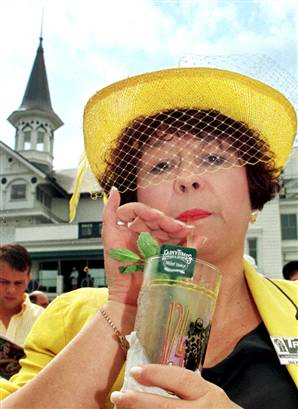 Thousands of red tulips have been planted in the Churchill Downs paddock and winner’s circle for this year’s Kentucky Derby. They were shipped from Holland months ago.  Nearly 500 red roses will arrive from South America a few days before the race (the first Saturday in May) and be sewn into the “Garland of Roses,” bestowed upon the race winner.

But the spearmint that will flavor hundreds of thousands of Mint Juleps is homegrown—just nine miles from the racetrack.

I am looking forward to a Mint Julep over Derby weekend. A sugary adulteration of good Bourbon is not my preferred taste in spirits. Bourbon should be drunk on the rocks, or with a splash if you must. But I’m willing to make an exception for the good luck I hope a Mint Julep will bring.  Picking the winning horse is hard mental work and a soothing tonic helps to ease the pain, especially when my pony doesn’t hit the tote board.

Bill Dohn doesn’t have time to handicap racehorses or mix fancy cocktails. Yet for over 33 years he has tied a considerable piece of his livelihood to the Derby. Dohn stays busy year round shipping mint, but the pace quickens when the Kentucky Derby approaches. He, and a part-time staff of ten  (Dohn being the only full-timer) cut 3,000-4,000 bundles in the 10-12 days leading to the Derby. In addition to Churchill Downs, bundles go to 10 regional Kroger stores and Louisville’s Paul’s Fruit Markets. Each bundle is enough to make 70 mint juleps. That’s 210,000 -280,000 Mint Juleps! 120,000 of these beverages are expected to be sold at Churchill Downs alone.

The business is an evolving family tradition. Carl Edward Dohn, Sr., bought 65 acres on Canna Road in Pleasure Ridge Park in 1930. The elder Dohn produced a spring and a fall crop of turnips, mustard greens, collards, kale, spinach, green onions, and cauliflower that were delivered to the Louisville Hay Market. He would sell his produce to pinhookers who would re-sell to small groceries. By the time his son Bill graduated from Hanover College in 1973, his father had sold off all but 10 acres, as his other two children had no interest in farming. Bill tried his hand full-time, liked his prospects, and entered partnership with his dad, in 1974, as Dohn and Dohn.

Bill Dohn lucked into mint one day that same year when he was delivering collard greens and kale to Netter’s Produce at Louisville’s downtown Hay Market. Mitch Netter asked if he had any mint. “Yeah, I’ve got a patch at home that my mother planted years ago,” he said.  “I’ll take what you’ve got,” Netter responded. Dohn sent a few bundles. “I’ll take more,” Netter begged. Dohn had no more.

Bill Schneider of nearby Jeffersontown, Kentucky, was a Farm Bureau friend of Dohn’s who was growing spearmint for the racetrack. He was too ill one year in the late 1970s to harvest the crop. Dohn volunteered to lend a hand to cut the crop and assembled bundles of mint for Schneider. By the early 1980s, Schneider had died and Dohn assumed the role as chief supplier of mint for the Kentucky Derby.

Where once Bill Dohn could see only five homes from his property, he is now surrounded by suburban sprawl. Making it on 10 acres for 39 years goes against the conventional grain of big-time agriculture that insists only bigger is better. Other larger growers are astounded he can make it on a few acres. He has to be efficient.

Dohn possesses a quick smile and an affable manner. Still, for the part-timers who arrive after high school, it’s no-nonsense, dirty work to cut bunches of mint and tie them into bundles. For these boys—a few of them representing the second generation at Dohn and Dohn—it’s their first job experience. As soon as I walked into the greenhouse, I could hear their playful banter and sense their camaraderie in the joy of good work.

The greenhouse, sweetened by the scent of spearmint, is used for forcing a small crop in early spring and late fall. There is nothing fancy, no frills—no metal halide grow lights, for instance—and minimal heating. Outdoors in mid-April, the principal mint crop was shorter than usual, hampered by a cool spring. Years of experience left Dohn feeling confident the crop, with just a few warm days, would make up ground. He divides field clumps for re-planting every five years or so and has no idea which mint cultivar he has grown all these years.

Late on Saturday afternoon, just before the Derby horses are saddled-up and led to the track, Dohn, if chores are done, hopes to be down at the lake with no television. He won’t be able see the Derby crowd of over 100,000. Lots of them, from the college kids in the infield to the high rollers in the Turf Club, will have paid a hefty $10 for a Mint Julep in a commemorative glass with the names of all of the Derby winners.

For the big spenders who want to pony up $1,000—or even $5,000—there are upgrade “exclusive” options—with “gold-filtered mineral water” from eastern Nova Scotia. My best guess is that these Mint Juleps get sold late in the day to gamblers who’ve gotten lucky and cashed a hand full of tickets. It is also my hunch that they’ve had more than a few cheaper cocktails before ordering one of these. The proceeds go to charity.

Here’s a recipe for the more frugal-minded. Your Mint Julep will work just fine with tap water.

And here’s an interesting spin with tarragon from Amy Stewart.

Bill Dohn may just forget about the race and pour himself a cold beer.