On my way to  David Culp’s garden I naturally stopped at Longwood Gardens, which I somehow hadn’t visited in at least a decade.  So, what’s new? 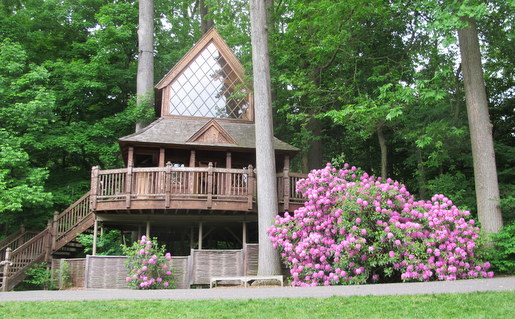 Treehouses! Three of them, and they’re grand like this one or smaller and funky.  Love ’em!

Above and below are the much newer “first terraced lawn in the United States” and “largest indoor green wall in North America.”  Both designed by “renowned British landscape architect” Kim Wilkie.

About that lawn, the press release tells us that “Due to the slope of the terraced landform, Longwood is using a novel and innovative combination of overhead and subsurface irrigation systems to provide adequate and efficient hydration.” I’d love to know how they mow it.  Honestly, I’m not a fan. 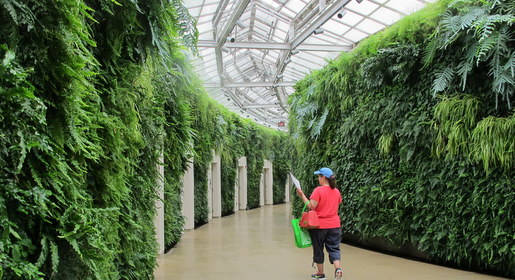 The green wall, covering over 4,000 square feet and packed with 47,000 plants, is awesome but apparently I missed the best part of this whole project – the rest rooms!  Or excuse me – “contemporary lavatories,” to quote again from the press release.  I read (now, too late!) that they’re underground, dome-shaped and naturally lit.  And sure enough, a friend later asked me “Aren’t those bathrooms cool?”  So if you visit, don’t miss the bathroom experience of your life. 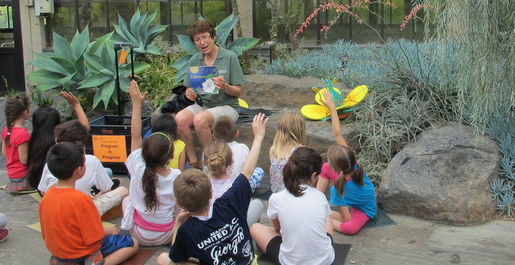 Another newish feature at Longwood is an indoor children’s garden, which I didn’t photograph (too packed with kids!) but looks like loads of fun.  With coves, a secret room, a maze, a tunnel and another maze plus lots of magical critters, it’s an obvious hit with the kids.

The photo above is of eager learners in the Silver Garden, which has always been my favorite feature at Longwood.  On my weekday visit there were groups like this everywhere.  Lucky kids! 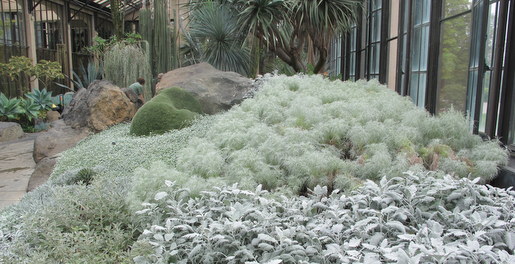 The Silver Garden, like the other 5+ acres under glass, looks great every day of the year. 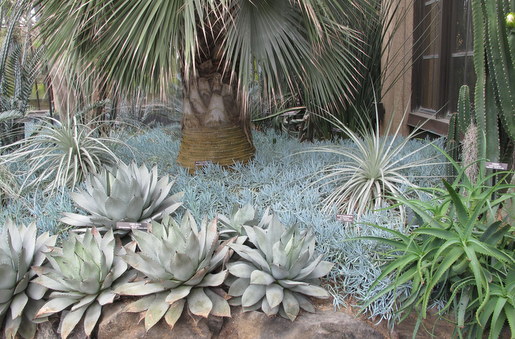 Before commenting on what’s old, how about some images of what’s blooming? Longwood has a handy guide for every week of the year  and given our unusually cool spring, I saw what’s normally seen the first week of June during my late-May visit.  That means it was post-azalea and pre-rose, but right-on for the rhodos, like the ones seen above with the treehouse.

Baptisias seen in front of blooming Ninebark.  Below, more Baptisia but this time in yellow.  With Allium, etc. 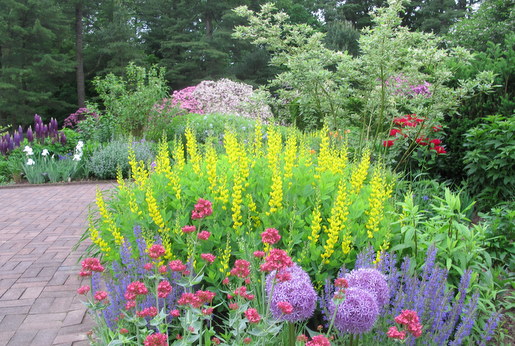 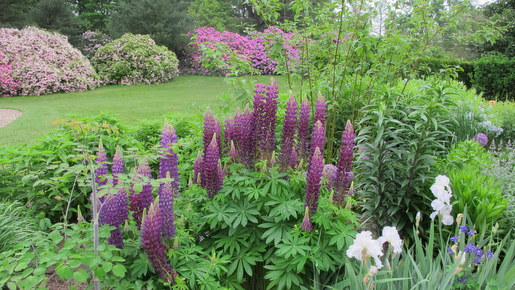 Lupines are something I never see in the DC area.  Lots more rhdodendrons in the background.

It was peony time, too. 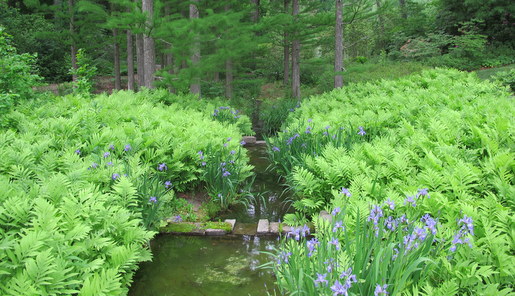 Siberian iris, which I much prefer to the fancier bearded Iris. 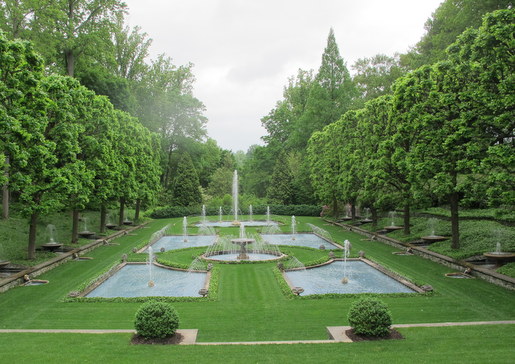 What’s old at Longwood?  Lots of fancy, dramatic fountains.  Very Old World, and wonderful.  The largest fountains are the site of Longwood’s famous light shows and fireworks.  Worth a visit, and conducted all year, except when the temps are below freezing.

Now cover your eyes if you hate criticism, but something else that’s old here is the chemically dependent style of gardening that’s being abandoned by enlightened gardeners and gardens across the country.   One of the staffers mentioned this to me, saying the gardens have to look perfect every day, so what are you going to do?  And after all, this is Longwood, the site of lots more than just plants on display. (Their Summer Concerts, for example.)  Some public gardens have sworn off pesticides altogether (the rose garden at the U.S. Botanic Garden is one) and others spray away (like the rose garden at the Smithsonian, just blocks away).  A staffer at a Maryland garden told me they’ve come to accept some imperfection, and their visitors are fine with it.

Obviously education is a big component of Longwood’s mission, so shouldn’t how-to-garden be part of that?  Signs could explain why there are holes in the foliage and tout the disease-resistance of the plants they’ve chosen to grow.  And they could brag a lot more about Sustainability at Longwood, a listing of items that now includes eco-friendly toilet paper but not a word about how they grow plants.

In my defense, I wasn’t the only visitor that day thinking about this issue.  A freelance photographer (of plants and insects) griped at length to me about Longwood’s growing practices.