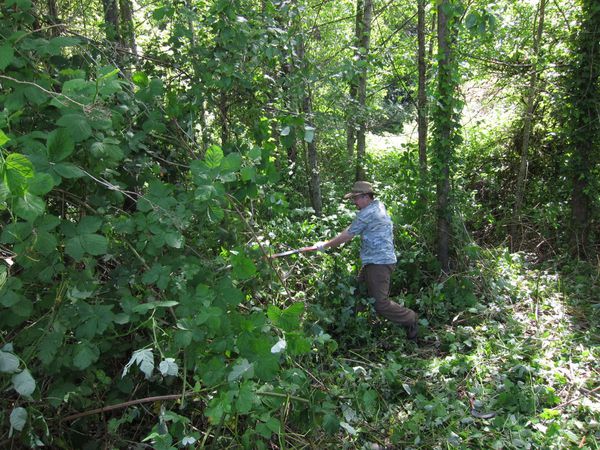 I’ve almost staunched the bleeding. The crimson crosshatches etched across my forearms don’t sting much, but they look impressive.  I was just practicing some close quarter combat with that tasty rascal of the Pacific Northwest, perhaps our yummiest weed, nature’s barbed wire, your friend and mine: the Himalayan Blackberry! (clap, clap, clap, clap).  This blackberry is the strong silent type: barely whispering during wind storms, the brambles can silently eat a shed. They build a mostly-evergreen thicket of arching canes which luxuriate over previous years’ growth.  Or anything else that couldn’t get out of the way fast enough.

In late spring the white flowers buzz with fuzzy bees. Then, in late summer the clusters of chubby, jet-black berries draw crowds of brave harvesters easily distinguished by their yellow plastic ice-cream pails. Kids pick and eat a few berries, and then huck most of the rest at their friends. One point if the berry sticks, more points for mushing one in somebody’s ear. At least that’s how I remember the sport.

Blackberry canes don’t mean to be so vicious. Their thorns are not for attack, or even defense really. And, correctly, the ‘thorns’ are prickles; arising like saw teeth along their green skin. Thorns only arise on species which have such modified branches. Every rose does not have a thorn, just prickles. Fall into a Pyracantha some night late: Those sucking chest wounds are caused by the finger-long thorns. That’s if you can unimpale yourself.  Blackberries’ relatively innocent prickles are for climbing, like pitons. Try to pull a cane out of a tree or shrub in which a blackberry is lounging and you’ll see how well they work. Oh, and spines are modified leaves, like on cacti… but enough prickling at this thorny issue.

Mostly recovered from round one, where I was only swinging a sickle, I’m off to try the gas hedge trimmer. If it works, it’ll be like the Jaws of Life, saving fences, cars, and shuffling neighborhood octogenarians from the shimmering green tentacles iconized in darker Japanese anime cartoons. Come to think of it, I think they ate my hibachi. I haven’t seen it anywhere.