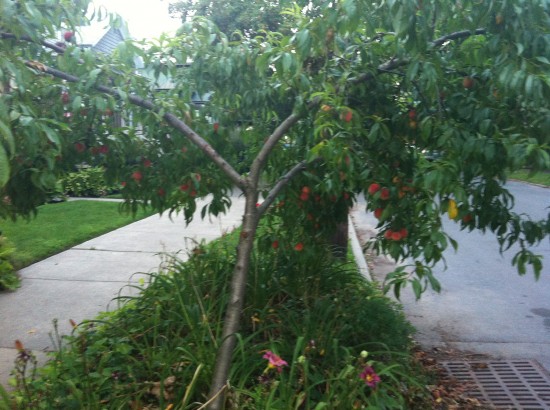 Behold a tree that is embroiled in more controversy,  pawed over more regularly, and assaulted by more attention, admiration, disgust, falling maple branches, and drunken wonder than a Real Housewife of Orange County.  A ‘Garnet Beauty’ variety, its checkered history began when the gardener ordered it bare-root from Fedco and neglected to stake it.  Because the soil on my hell strip is too light and sandy to hold its root ball in place, given its luxuriant crown, it started leaning.  Then it got caught on some construction equipment belonging to my neighbor’s contractor, and the lean became dangerous.

Adding to the general precariousness of its anchorage is its absurd fruit production.  A million absolutely delicious fruits that weight it down.  The tree is the wonder of Saratoga Springs, NY, because most people don’t understand that it’s possible to grow great peaches this far north.  Peach trees of the Fedco-recommended type will thrive into Maine as long as they are planted in poor soil.  In fact, the only reason peaches are associated with the South is the fact that they were one of the few crops that would do well in soil that had been wrecked by cotton.

The peaches ripen during tourist season in Saratoga.  So wonder means a lot of casual theft by drunkards. The squirrels also are casual thieves of my peaches, leaving the nibbled pits on my porch. I don’t mind.  The only form of thievery that ever really disturbed me was the premeditated form practiced by a sexagenerian  in a kimono, who used to arrive with a sack.

This year, however, the pilferage has been neglible because my daughter’s former babysitter, the lovely Etienne, is visiting from Paris.  Etienne loves good food and keeps an eye on the tree.  She checks the peaches several times a day and brings the ripe ones inside.  On Sunday, there were so many, that I made a pie.  Peach pie…a major reason to have a garden.  Like cherry pie and blueberry pie, peach pie is inedible when it’s made commercially.  But when it’s made with fruit right off the tree…sublime.

After the fruit is gone, I’ll get out there with a bow saw and a shovel and some stakes and see if I can restore some dignity to the tree’s posture. But I have to say, I love it anyway.