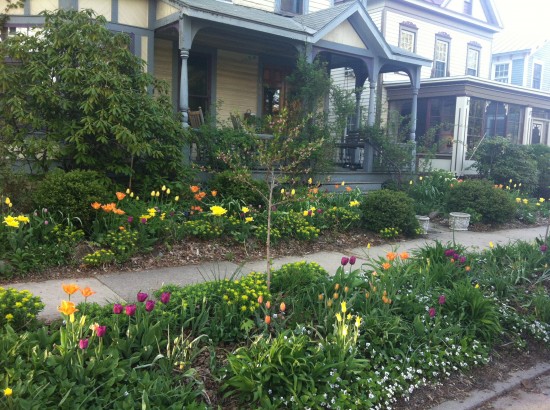 I am at least a month late to be doing this post, and everybody sensible forgot about his or her tulips long ago.  But not me.  They were particularly astonishing this spring, probably because I planted them in such a fog of misery last fall, I don’t even remember getting them in the ground. My husband of twenty-five years, for whom I’d always had a lot of respect, had just blown up our life together in the most cowardly and cruel way imaginable.  We have three kids who are not yet grown.  To say that I was not thinking straight was an understatement.

So I suppose I numbly pulled out a credit card and bought five or six hundred bulbs, but I literally do not remember. And I suppose I dug the holes–a LOT of holes–while so defeated I could barely lift a shovel, but again, Senator, I do not recall.

Then there is that long, long, long upstate winter that starts the second the last tulips are buried at Thanksgiving…and that doesn’t let up until April, when the crocuses and bulbous irises remind everybody that amidst the browns and blacks and icy whites, there is still an element of existence that is purple.  Finally, the tulips appear in late April and early May, and life is an utter carnival of ridiculously saturated color, big stalks and big bold flowers with wild double or lily or egg shapes.  The person most surprised at the riot?  The gardener who stuck them in the ground.

Which reminds me, despite myself, of Daniel Gilbert, the Harvard  psychologist and happiness theorist, author of Stumbling on Happiness and this semi-annoying and much-viewed TED talk. Gilbert always annoyed me because he seemed more of a moralist than a scientist.  Or maybe because the things he said about happiness did not describe my idea of happiness, which is animal happiness: sunshine, using my shovel, sex, food, wine, smelling the flowers, chatter that is the human equivalent of birdsong. That, and enjoyable work.

Gilbert, on the other hand, talks about how bad we humans are at predicting what will make us happy.  And he points to research that shows that a year after the key events, the lottery winner and the paraplegic are equally happy, because humans have a psychological immune system that allows us to make the best of whatever situation we are in.  So, in Gilbert’s view, since varying fates don’t matter to the extent we expect, we might as well be good.

The thing is, I am the paraplegic in the example above.  And Gilbert is right in that nine months after the fact, I am keenly aware that the birds still sing and good food still tastes good.  I have also discovered that I am incredibly lucky in friends, family, and kids, since they rallied around me and kept me from any feeling that my horizons had shrunk. In fact, I have discovered that the bottom of the crater is an extremely interesting place to be.

I understand now why I spend $300 every fall on hybrid tulips that will appear once, and then fade the next year into meaningless bloomless foliage.  I would never spend that much on a tree that could last generations, but I spend it on ephemera when the ephemera happen to be tulips.  I do it because the tulips are life.  We always misjudge its potential.  We always forget in the depths of winter that spring comes around in gaudy glory, no matter what.