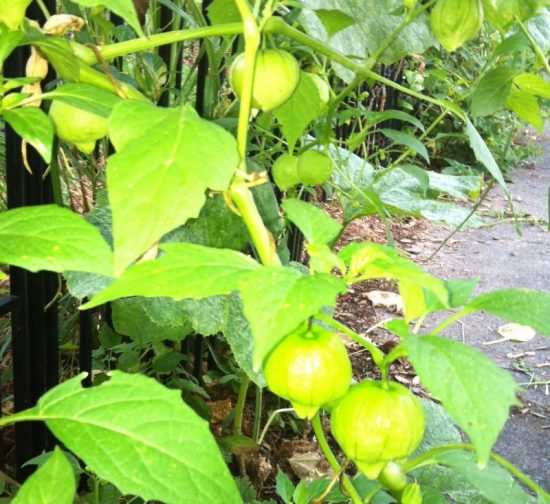 In the same way as dog lovers sometimes appreciate cats, vegetable gardeners–who have to exert a great deal of control over their domain–sometimes appreciate a crop that has no particular need for the gardener’s hand. That would mainly be tomatillos. Plant them once, and you need never plant them again. They will seed themselves everywhere. And even in my relatively frigid northern climate, they seed themselves in plenty of time to yield ridiculous amounts of fruit in a short season. I generally pull all of the 10,000 plants that show up in spring, except for four or five along a fence that can support their sprawling productivity.

I try to control myself in terms of the number of plants since the year that I harvested an entire 10-gallon garbage can of tomatillos in one go. Fortunately, my mother stole most of those. But they are a good crop for somebody who is lazy about processing a big harvest. With their paper wrapping, they will last for a long time in a bowl in a room at room temperature. You can roast them–a few minutes under a broiler on each side until the tops get black–throw them in a food processor–and they will freeze well.

I like a roasted tomatillo salsa with fresh onions, jalapeños, and cilantro. But, if I really need to use a lot of them up, I like a chile verde recipe of my own making.

I roast the tomatillos under the broiler, a full cookie sheet’s worth, and chop them in the food processor. I also strip the meat off of a good-sized chicken, make stock with the skin and bones, and bake the boneless rest. I figure out some white beans, either canned or dried and cooked.

Then I saute in olive oil three good-sized onions until they are golden and sweet, and add a few diced jalapeños from the garden, some garlic, and 1 lb. of Spanish dried chorizo, casing removed and chopped into chunks. Then I add the tomatillos and a few cups of chicken stock, cook until it is all beginning to merge, add the baked chicken, pulled nicely apart–the texture is so much better than if you cook it in the stew–and add white beans and salt to taste.

This sits on the burner for a few minutes until it appears suffiently thick, smooth, and complete, and then is served with rice, chopped fresh cilantro, and a spoonful of sour cream. It’s so delicious that one will thank the powers that be for the unruliness, sometimes, of food plants.