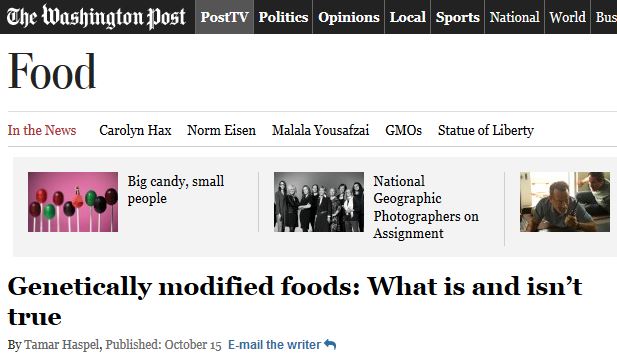 Today the Washington Post introduces a new feature in its Food Section that will tackle controversial food-policy topics, like genetically modified foods.  It’s called Unearthed and in the inaugural column the writer proposes a test for finding information about GMOs that can be trusted.  That’s a question I often ask when I’m reading about gardening subjects that inspire opposing views, and not just plant origin (natives v. nonnatives), a topic that draws record numbers of comments, but also compost tea, sphagnum moss and, of course, Roundup.

I hope you read the whole article but briefly, the author asserts that if a source ONLY mentions the benefits of GMOs (in this example) or ONLY the risks, then don’t trust that source.  She names some sources that fail that test (the Union of concerned Scientists and the American Association for the Advancement of Science), but lots more that pass.

She also concludes that among nonbiased sources there’s a consensus:  that there’s no evidence that GMOs are bad for us.  Okay readers, your turn.

I have no strong feelings either way about GMOs – because I don’t know enough – but I do worry that her standard for finding trusted sources could sometimes suffer from the problem of false equivalency that causes the news media to utterly fail to educate the public on so many controversial topics.  Sometimes the facts are the facts – the Earth really IS round – so quoting both sides on the issue just distorts that reality.