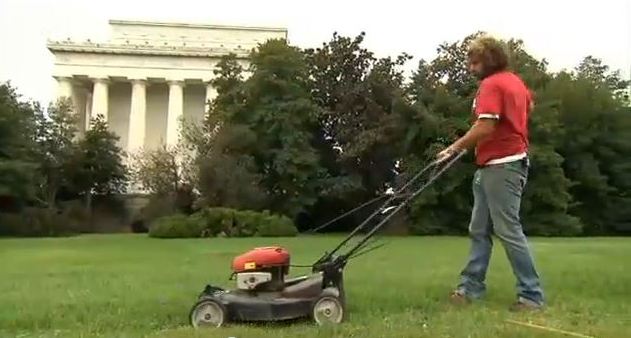 Google “lawn mower guy” and you’ll find dozens of stories about Chris Cox, shown here mowing around the Lincoln Memorial.  He became a local and national hero when he single-handedly mowed around memorials during the recent government shutdown.  Worried about public safety and vandalism at the monuments, at first he spent his nights patrolling them. That was when he noticed trash piling up, so he bought trash bags and got to work filling them. Clearing fallen branches came next.  By day 16 of the shutdown, the lawn really needed mowing, so he brought his mower from home and got to work mowing, which is what brought him to everyone’s attention.

The Park Service told him to stop mowing and he did, but continued with trash pick-up.  As news spread, as many as 200 other volunteers showed up on a single day to help.

And a hero was born!  Cox’s volunteerism has resulted in massive media coverage, and this “Lawnmower Guy for Congress” Facebook page (with 3,686 likes so far).  Then this week the national group Crowd it Forward  honored Cox in a ceremony on the Mall and awarded him with a bright new chain saw (retailing for $1,200) donated by a power-equipment company.   They were originally going to give him a riding mower, until learning that Cox isn’t, in fact, in the landscaping business but earns his keep as a chain-saw sculptor!  Yes, he creates those bears, cigar-store Indians and Tiki heads we see at the fair. 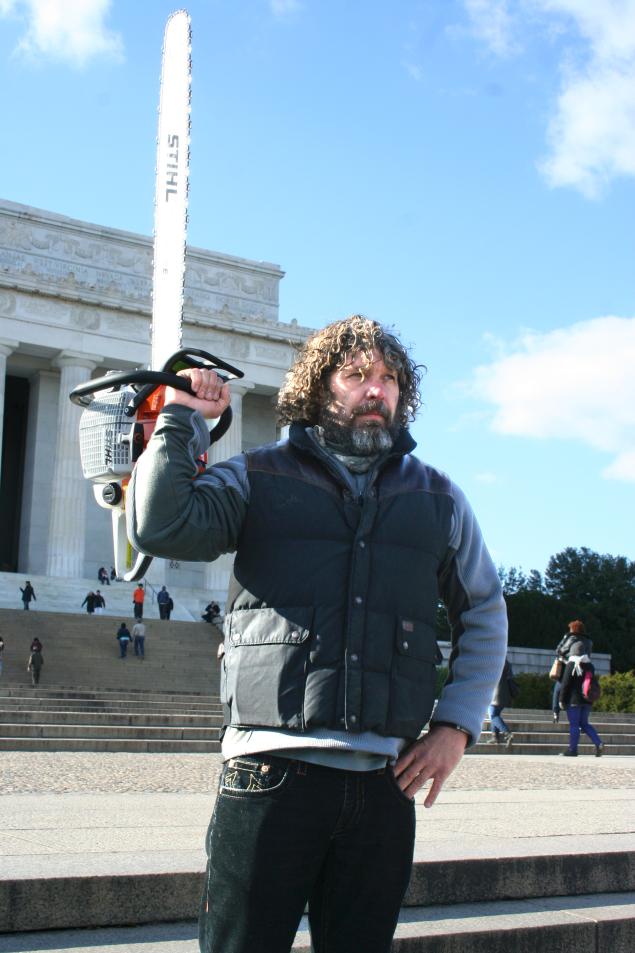 Thus, he was given a humongous chain-saw but it’s actually too large to be used to create sculptures.  It’s perfect for tree-cutting, though, and Cox says he plans to use it, as well as $1,701 in cash from Crowd It Forward, for his new endeavor – Memorial Militia – to “continue to pay it forward.”  The Militia is planned as a network of volunteers who do yard work for infirm vets – performing random acts of lawn mowing, brush-clearing, tree-trimming and leaf-blowing.  About 1,800 people around the U.S. have contacted Cox, expressing interest in participating.

Why the focus on vets?  Though not one himself, Cox is a big supporter of veterans and had been moved to prepare the Mall for a large veterans event there.

So despite a media swarm and partisans trying to co-opt him to reinforce their own notions of patriotism, Chris Cox is eschewing personal gain and turning his simple act of mowing into thousands of acts of kindness toward disabled veterans.  Yard work is a great way to say “Thank you for your service.”