How does a gardenblogger find something to write about in December?  By jumping at the chance to taste-test produce for the USDA, that’s how, at least if it’s just 5 minutes from home.  Anyway, I was curious about the process, starting with the detailed pre-test instructions – no eating/drinking within 30 minutes of arrival.  Science, here I come!

In a brief orientation with the scientist conducting the study, the volunteers learned that that we’d be tasting apples submitted for USDA approval by a “privately owned technology company” in Canada called Okanagan Specialty Fruits.  They were “seeking to use various lab methods” to create “non-browning apple varieties.”  Hmm.

The apples we’d be tasting had been genetically altered to not turn brown after being cut or damaged, thanks to having the enzyme that causes the browning reaction turned off.  We were assured that no foreign genes had been introduced to the apples – unlike transgenics.  The nice scientist said he’d eaten dozens of them himself and hadn’t grown any new digits yet – hahahaha.  (GMO humor – gotta love it!)  And he was honest about the purpose served by such genetic manipulation – to save the growers money.  The hand-out I was given (after identifying myself as a garden writer) phrased it like this:  “The company believes that non-browning apple varieties will provide benefits to growers, packers, retailers and consumers, plus others along the value-chain.”

So on with the test! 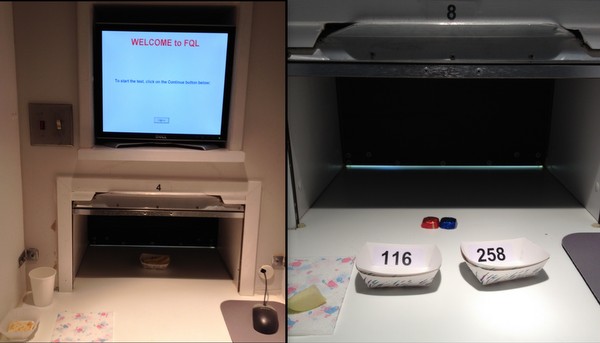 The volunteers all had separate cubicles containing a screen that would walk us through the process and a magic box that produced little paper dishes containing numbered apple slices (all of which I figured out with the help of my fellow guinea pigs, who all seemed to be USDA employees who were old hands at this).  Above left you see a new sample ready for me, and to the side, some water and crackers to clear my palate.    On the right you see the last item to appear from the magic box – two chocolate candies.  Not expecting even that much, I was happy to see them. 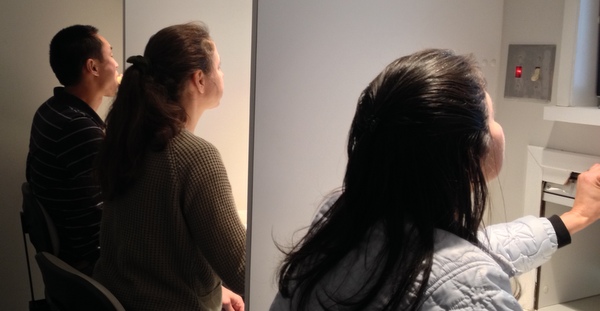 In total, 12 groups of 10 volunteers would taste and judge the apples.

Curious about the results?  Honestly, they were all Golden Delicious apples, which I don’t particularly like – too soft and mealy to my taste.  So for both GMO and control slices I reported my negative findings, but I suppose that’s helpful in proving that they taste just like their (soft, mealy) parents.

The Campaign Against Non-Browning Apples

Interestingly, within days of munching down these GMO apples I began getting requests to join the fight against them!  This campaign against a non-browning GMO apple called Arctic starts with the familiar Joni Mitchell plea to “Give me spots on my apples but leave me the birds and the bees.” I loved that song!  And here’s a fabulous rendition by Joni herself back in the day – 1970.

But could I be sure that this anti-GMO campaign was targeting the very same apples I’d just tested? Minor Googling revealed that yes, Arctics are the brand of apple I was tasting.  (The Okanagan company helpfully declares “We’re in the News!”  They sure are.)

So, Am I Horrified?

Well, no, because like almost everyone, I’ve been eating GMO foods for years – though unwittingly.  And I’ll dare to admit here that I’m a fence-sitter on the issue of GMOs.  But I know many of you have strong feelings about them, so fire away.