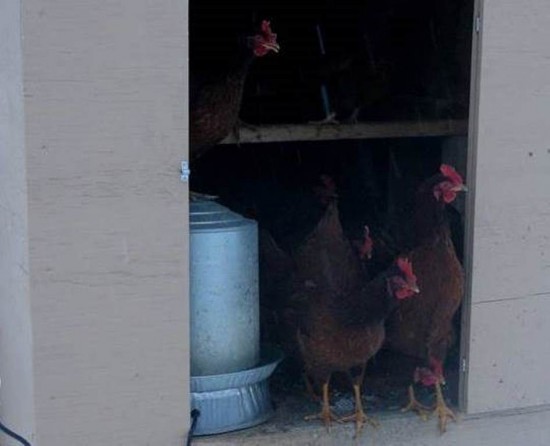 We love to think of chickens frolicking in open pastures, living the “sustainable” life by chasing bugs and laying big, beautiful eggs. But have you ever wondered what happens when winter arrives and those free-ranging hens have to deal with snow?

When I started our flock in the salad days of June, it hadn’t occurred to me that pasturing chickens might be a problem in winter. But after a nor’easter dumped half a foot of snow on our Upstate New York farm recently, I have to conclude that chickens are no fans of the white stuff. When I opened the door to our mobile chicken coop after the storm passed, the hens just stood on the threshold and stared out as if in shocked disbelief at our newly snow-covered landscape.

Only days earlier, I need only crack open the coop’s door and the chickens would fly out  in a mad rush to spend another day scratching in the grass in the orchard where the coop was parked. They ranged widely in their foraging. Our farm was their playground. Now, I opened the coop and the chickens refused to budge. Even their feeder full of grain–stationed just a few feet away in the snow–couldn’t make them stir.

I worried a little, because our coop-on-wheels was designed only to be big enough for the chickens to sleep in at night. It wasn’t meant to be a full-time residence. But since the chickens seemed determined to remain inside, I moved the feeder into the coop so they at least wouldn’t starve. That left even less room for the birds. Still, they continued to use the nesting boxes attached to the sides of the coop to lay the usual number of eggs. Every couple of hours I would trudge through the snow from the house to the orchard to collect the eggs before they froze.

I managed to tempt some of the hens out of the coop by placing the feeder on the ground closer to the door. Eventually, about half our 27 hens and the two resident roosters decided it was safe to hang out underneath the coop where the sod was bare. But they wanted nothing to do with the ocean of snow that lapped at the edges of their little home. Apparently, six inches might as well be El Capitan if you’re a Rhode Island Red.

Would we really have to wait for spring before our hens stopped being so chicken and acted like–well, like chickens again? Is there a Plan B for pastured layers in winter?

Ah, but there was one intrepid hen who was not deterred. She had grown used to laying her eggs atop a stack of straw bales in a livestock shelter about 50 yards from the coop. No amount of snow would stop her from her appointed mission: she was bound to get to her favorite nest.

It was pretty hilarious and a little sad watching her plod through snow as deep as her legs are long. The best she could do was a kind of lopsided waddle, dragging herself along, one impossibly slow step at a time. When she finally made it to the shelter, the sheep gathered round to make sure she was alright. Then, after depositing her egg, she began a slow march back across the paddock toward the chicken coop. Our Jersey heifer bent low as the hen passed and gave her a big lick on the behind as encouragement.

Finally, I took pity on the hen and carried her that last few yards to the coop.

Such a brave little hen. Brave, but not crazy. As it turns out, this was one snow adventure even she had no interest in repeating. Our chickens would just as soon wait until all this snow disappears.