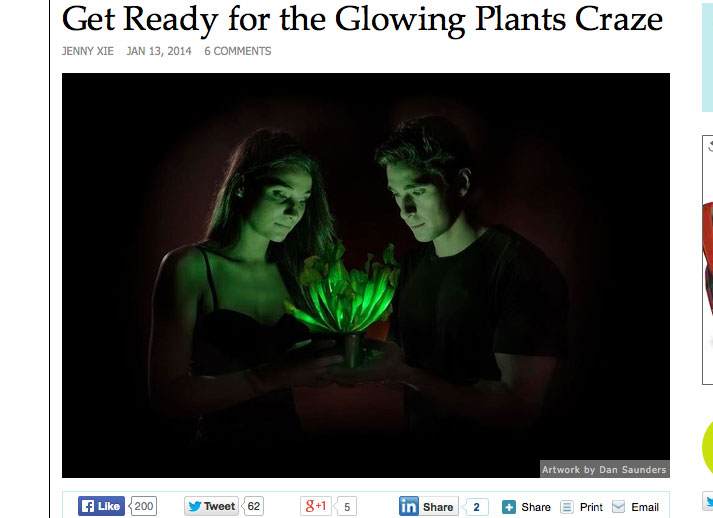 Welcome to the groovy world of glow-in-the-dark plants. They’re not much more than a novelty now, but a company called Bioglow has been developing plants that produce their own ambient light since 2007. It’s the result of genetic engineering (with the expected protests); the transplanted genes create auto-luminescent Nicotiana alata (ornamental tobacco) that emit a quiet blue-green glow throughout their 2-3 month life cycle. The cultivar is named Starlight Avatar, recalling the glowing plant life that populated the film Avatar. The plants must be kept inside at houseplant temps and light exposures.  Here’s more on the science.

Bioglow (their site seemed down when I posted this) finally has 20 plants ready to be auctioned off at the end of this month and wants to roll out thousands more in the summer. And apparently, this is more than a ridiculous fad. The company’s ultimate goal is to produce shrubs and trees that will light up sidewalks and roads, reducing the need for fossil fueled outdoor lighting.

Nicotiana is a plant I grow every summer, usually the tall species varieties, not these stubby ones. If they had more stature and were available for garden use, I might try them.