This is a long-simmering rant about the many ways the term “invasive” causes confusion, and more.  DO weigh in with alternatives, pushback, and rants of your own.

“Invasive” as synonym for “nonnative”

Google “native versus invasive” and the 5.6 million hits confirms my observation that this is a common usage, and it’s led to a common misperception in the public that the opposite of native is indeed invasive.  QED: nonnatives ARE invasive.  Even regular garden writers sometimes use this juxtaposition, which should more accurately be “native versus nonnative” or I guess, “exotic.”

That great leveler, Wikipedia, confirms this problem about the term “invasive”: “The first definition, the most used, applies to introduced species (also called “non-indigenous” or “non-native”) that adversely affect the habitats and bioregions they invade economically, environmentally, and/or ecologically.”  At least their second definition is more accurate and even includes native species like deer.  No argument there.

Defining away the invasive behavior by natives

Can native plants be invasive?  Sure, as evidenced by the above-mentioned deer or in the plant world, wild grape.  But when native plants are termed invasive someone invariably pipes up to correct the writer because by definition, they’re nonnatives only.  And sure enough, legally, by the official U.S. government definition, only nonnative plants can be deemed invasive – for purposes of qualifying for money to remove them.  The 1999 Federal Executive Order on Invasive Species defines an invasive species as a “species that is not native to a particular ecosystem…”

We all know that plant behavior depends on the exact conditions the plant is growing in, as well as more broadly, the region.  So some plants that behavior well in the North are overly vigorous in the South.  Or some, like the infamous purple loosestrife, are vigorous in wet spots, not in dry ones.  Examples abound.

Yet this site by the U. Georgia and many other sources, including the National Park Service, don’t distinguish by region, and the resulting list of “invasives” includes these surprises to gardeners near me: several viburnums, two verbascums, several veronicas, red and white clo0ver, Japanese yew, 3 spireas (MOST on the market), various salvias, willows, nandina, grape hyacinth, Miscanthus sinensis (without specifying that it’s only the early-bloomers that spread), Lespedeza thumbergii, Pee Gee Hydrangea, cotoneaster, and strangely, littlestem bluegrass (Andropogon virginicus).  Yet native thugs like trumpet creeper are encouraged and they’re not invasive?

That designation of Spirea really bothers me because it’s such a self-sustaining, easy, low-maintenance and well behaved shrub, one I’ve grown for 30+ years with no signs of trouble.  And yet another source – the  USDA National Invasive Species Information Center – also targets Spirea Japonica and says this about it: “Spreads rapidly and forms dense stands that crowd out native species.” This and other contradictions between official reports and in-garden experiences growing targeted plants is puzzling to me.

Adding to the overly broad regionality of invasive-plant designations, there’s a new book on invasive plants, written for a national audience.

Shouldn’t invasiveness be designated locally?  And sometimes, for certain conditions?

“Invasive” used instead of “spreading”

I’ve heard garden-club members describing their passalong plants at plant swaps as “invasive” if they spread at all.  Which leads to said garden club being accused of encouraging the use of “invasives,” among other things.

Methods of “invasion” all lumped together

The  USDA lists these characteristics of invasive plants: “produce large numbers of new plants each season; tolerate many soil types and weather conditions; spread easily and efficiently, usually by wind, water, or animals; grow rapidly, allowing them to displace slower growing plants; spread rampantly when they are free of the natural checks and balances found in their native range.”

Yet some of those qualities are valued in the garden – especially tolerance of many conditions.  And for the gardener on a budget, especially one trying to replace their lawn with another groundcover, spreading is a good thing and it’s usually described more positively as “fills in quickly.”

What if the standard were: Does the plant spread in a way that causes harm to natural areas?  For example, plants that are spread by bird, like English ivy, so that the seeds can go everywhere and harm natural areas.  Unlike Spirea and Nandina that spread by rhizome and produce a couple of offspring every year, if that – just like Itea does?  Or if it’s simply spreading in the garden, is it impossible to control, like running bamboo?

For example, “Invasive Species of Concern” in Maryland includes mostly plants we’d all agree are thugs and not even considered garden plants, but daylily?  As a sun-lover, it won’t spread into the woods and even out in the sun, how hard is it to dig up?

Or a plant could be harmless in a townhouse garden on Capitol Hill but potentially harmful if planted on the edge of a forest. 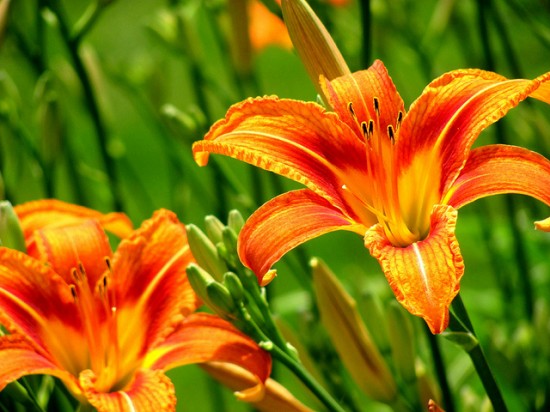 I wish there were several terms used to describe spreading behavior by plants, rather than the single term “invasive.”  How’s a gardener to choose between groundcovers like pachysandra, periwinkle and English ivy, when they’re lumped together as equally thuggish when only one of them will grow virtually to strangle trees, set seed and spread indiscriminately?

In researching the topic of “native versus exotic” I came across one example of the type of reporting on invasive species I’d like to see more of – based on research, not scare tactics.  Just one quote from this article by Cornell will piss off some readers, but here goes:  “A small percentage of plants exhibit invasive tendencies, while the majority of plant introductions are benign or beneficial.”

Plant breeders are hard at work breeding out invasiveness in popular garden plants, as reported on the Native Plants and Wildlife  Gardens blog.  Though controversial, especially among native-plant advocates, this type of breeding is recognized by pragmatists as a step in the right direction.