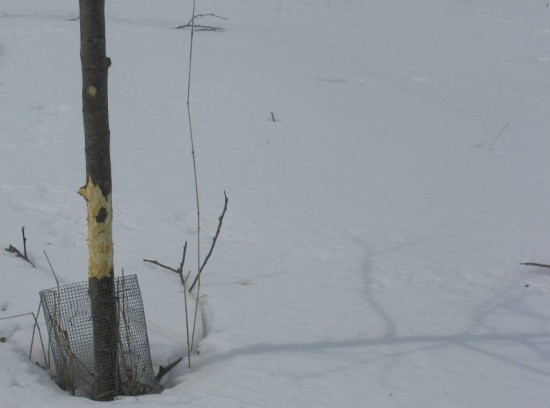 Delayed almost a month by an unusually cold and prolonged winter, our friend Gini–an avid arborist– arrived the other day to give us our first lesson in orchard pruning. We were anxious to begin work on the more than 100 young fruit trees we acquired when we bought our farm property. We gathered our shears, pulled on our wool caps and hiked out to the orchard, only to find that Mother Nature had yet another surprise for us: something has been eating the bark off our apple trees.

Numerous trees, barely five years old, showed signs of being noshed on. In some cases, the little trunks had been nearly girdled just above the wire cages that had been placed there by the previous owner to protect them.

Close inspection revealed tiny, faint paw prints around the affected trees–most likely some kind of rodent. Rabbit? Ground hog? Or perhaps something much smaller, such as a vole?

We have lots of voles on our property. About the size of a field mouse, they are active in winter, tunneling through the snow. Walking feed out to the chickens, I would often catch glimpses of them, diving from one tunnel into the next. They must have been awfully hungry to start eating tree bark. In fact, it’s full of nutrients, and rodents are equipped with special enzymes to digest it.

But how could they have reached above the wire cages to chew on the bark? Gini, who’s been farming and gardening in these parts for years, speculated the voles had done their feasting before the snow melted, when the level of snow would have been much higher. Or, it wasn’t voles at all, but a much taller creature.

In any case, we had to count these newly gnawed trees as another demerit against us as newbie orchardists. Last year our peach trees lost entire branches because we had neglected to thin out the peach crop. The weight of the fruit caused the branches to snap before we realized our error. Other trees have simply expired from neglect. And now we have numerous trees that may not survive because of damage from an entirely new and unexpected source.

Removing the bark from trees limits their ability to draw water from the roots upwards and transport energy gathered from the sun down below ground level. The vessels that perform these vital functions–complex tissues called xylem and phloem–are situated in the thin outer layer of a tree’s bark. If the damage completely circles the tree, this essential circulation is cut off and the tree dies.

Some quick research on the internet revealed that bark damage can be repaired by applying grafts of bark from the previous season’s growth. According to an article published by the University of Connecticut, affected areas should also be coated with grafting wax or a water-based asphalt emulsion to prevent them from drying out. Others warn that coating traps moisture that causes decay.

I’ve since noticed that a couple of trees stripped of bark by our goats last summer (what was I thinking grazing them there?) have survived with no help from me. I probably should have applied first aid when the damage occurred. The trees are budding out on their own.

Since there was no evidence of missing bark in the orchard when we bought the property more than a year ago, I’m wondering if this season’s unusually harsh winter–and one of the coldest month’s of March on record–can be blamed for making our local wildlife so desperately hungry. We started with more than 100 fruit trees–plenty of work already. Since we have committed to making our orchard thrive, we now have to think about measures to prevent more damage next winter.

Farming is like Forest Gump’s box of chocolates–you just never know what you’re going to get.