I have dozens of floras sitting on cluttered bookshelves: from China to the Caucasus and from Kansas to Kentucky. Yet even more mileage is guaranteed from a new botanic investigation that covers territory closer to home—my neighborhood. I predict the pages of Pat Haragan’s “The Olmsted Parks of Louisville: A Botanical Field Guide” will soon become dog-eared.

But why, you wonder, would such a narrow focus on local flora—nearly 1990 acres in five principal Louisville Olmsted Parks (Cherokee, Seneca, Shawnee, Chickasaw and Iroquois)— be so important? It’s the distinction between knowing and caring for a place from stem to stern and taking a seven-day Caribbean cruise. On an ocean cruise, you may have a brief flirtation with Ocho Rios, but by the time you spot your first flamboyant tree, it will be time to shove off to Cozumel and another Midnight Buffet. For the full measure of a place, you’ve got to jump ship and stay awhile—wander around, take notes and carry a hand lens. You’re lucky if you’ve got someone like Pat Haragan as your skipper to show you the way.

Before her entry into the botanic world, she danced with the Cincinnati Ballet and trained with the New York City Ballet, but a bad knee sent her to the sidelines in high school. While recuperating she spent time weeding in her mother’s garden. She fell in love with plants. Pat enrolled in the horticulture program at Ohio State University and found her calling during a local flora class. Soon she was knee deep in the herbarium under the tutelage of her botanical mentor. “I owe everything to Tod Stuessy,” she says.

Pat totes vascular floras in the back of her car for reference and wears a lanyard carrying an essential tool of the trade—a  magnifying hand lens for close-up inspection of minute floral parts.  Sniffing out plant species requires talent and legwork. Pat is patient and has a sharp eye. She has found plant species practically under my nose that I didn’t know grew so close by. Genera with odd names like Iodanthus and Scrophularia are right down the street in Cherokee Park, a stone’s throw from our Louisville home. Neither of these is likely to set the gardening world on fire, but it sure is nice to meet the neighbors.

Pat is a field and herbarium botanist. “Nothing more,” she modestly insists. “I like exploring, documenting plants and working in a herbarium.”

Pat was hired by the Louisville Olmsted Parks Conservancy from 2005-2007 to study the flora of Cherokee and Seneca Parks prior to an ambitious Woodlands Restoration Project. The Conservancy wanted to see what was there before and after the removal of invasives—principally the bush honeysuckle—that had smothered native spring wildflowers and inhibited the germination of hickories, oaks and buckeyes. Pat couldn’t let go after the two-year project. She continued on her own for another six years on what became her botanical field guide. 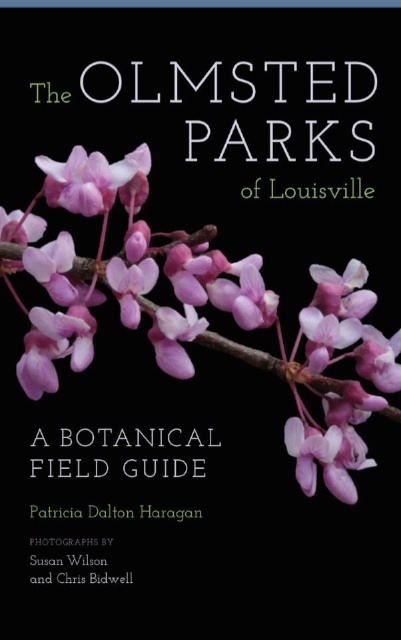 Last August, Pat called excitedly to say that there might be a new Cherokee Park discovery—an uncommon, native succulent Sedum telephoides. For any plant-crazed zealot, this is like seeing flecks of gold in the creek. And yet, before you stake your claim, you must scratch your head and wonder: is this real? Or, to borrow from the poem that opens Pat’s book, is it “just my desire for drama on a small scale?”

pulse of light and shadow,

the patience of waiting out the seasons

for my moment of truth

so I can put on this gold face.

Pat and Julian Campbell, a Lexington-based botanist, found the Sedums growing on limestone ledges, above Beargrass Creek. They looked very similar to Sedum telephium, the mother of  ‘Herbstfreude’ (Autumn Joy), one of the most popular perennials in the world. There were German irises, growing nearby. The Presbyterian Seminary was up the hill. This made me a little suspicious that the Sedum might be a planted poseur—not the native.

The Sedums, scattered along the ledge, growing in the shade of hackberries and a chinquapin oak, weren’t in flower. We made several trips in the weeks following to see how all was progressing.  The first few blooms were open on September 19th, but it was still hard to make a final determination.

I brought along stems with leaves and a few remaining blooms of the garden origin Sedum telephium for comparison. In spite of its glorious name ‘Autumn Joy,’ the blooms in Kentucky are nearly faded before autumn begins. It was hard to tell if the anthers were sufficiently red, a telltale sign, that might help with a positive ID for the native species. Pat needed another week to have another look. Cuttings were sent to Georg Uebelhart, my Jelitto Perennial Seeds colleague, who said the serrated leaf edges looked like the real deal, but this wasn’t enough to give it a positive identification.

By summer’s end, the Sedum investigation hit the trail’s end. Pat and Julian Campbell decided it was not the native Sedum telephoides after all.

This was a minor setback. The revival of so many species, scarce for years, was a huge success. The removal of bush honeysuckle, porcelain berry and wintercreeper opened up Cherokee’s forest to new growth. As a result, there are now healthier populations of bent trillium, wild hyacinth, red columbine and violet wood sorrel.

Some botanists are loners who prefer the woods or being in the herbarium with stacks of dried, pressed specimens. Pat enjoys this solitude as well, but she also likes good company and an Indian Pale Ale. But nothing seems to give Pat pleasure like teaching folks about basic field taxonomy.

And we are grateful.

Join Pat on one of her periodic Wildflower Strolls.

Allen Bush is on the Board of Trustees of Louisville’s Olmsted Parks Conservancy.