For my new volunteer project promoting DC’s public gardens, the focus is on images, using them to create videos, but then what?  Just a slide show?  I think not, because Pinterest and Instagram are hot-hot-hot and gardens are uniquely suited to visuals, to say the least.

The research on marketing with Pinterest is consistent – beautiful photos are all-important.  But then I asked garden writers who use Pinterest and they went farther, telling me that gardeners want more – “added value,” like Pinterest boards that teach.  Kat White suggested using “Great ideas for winter interest from XYZ Garden,” and photos that show the benefits of visiting a garden.  So we’d show people relaxing, learning, and admiring the flowers – just what  Professor Benfield’s research on garden tourism -has shown works to attract visitors.

Helen Yoest had a great tip – to invite people to join a joint Pinterest board so that my group’s pins show up lots of places.  (More on that below.)

Marketing maven Suzi McCoy at Garden Media Group tells me that Instagram is the easiest way to snap and share. “Plus you can enhance and get creative. I also like to use Picframe to make a collage for sharing in several platforms. I always take a picture of the garden’s signage as a guick visual to show where I am. And I take shots from different angles to show the space. And remember to take really close up artsy shots as well as plant tags to ID later.”

To find out how public gardens in other cities are using images, I perused the Public Garden group board on Pinterest and quickly found the the reigning Pinterest champ among all public gardens – Lewis Ginter in Richmond, VA.  They have 2.5 million followers, fer crissakes.  How do they do that? 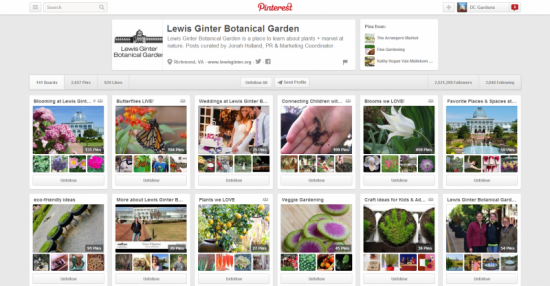 I got the answer from Jonah Holland, who does social media for the garden, and it turns out they got lucky.  Pinterest noticed and liked their use of Pinterest and recommended it early on to all users.  It also helps that the garden adopted Pinterest early, and they seem to be early adopters of everything.  The social media campaign includes not just Pinterest but Instagram, Facebook, Twitter, a blog, Youtube, Flickr, Linked In, Google+ and Tumblr.  (That last one, what is that?)  And they’re experimenting with the use of QR codes in the garden.

Using Pinterest, Lewis Ginter’s gotten exposure to a wider audience – like the wedding and cooking audiences, both of which are huge on Pinterest.  And they use joint boards to multiply the viewership, like one “Natural Va beauty” and “Richmond with Kids,” with eight different entities pinning.

So how do they accomplish all this?  With Jonah’s 25 hours a week and a whole team of staffers and volunteers contributing, too.

Jonah turned me on to a terrific survey that the American Public Garden Association did of the gardens’ use of social media, with results from 11 gardens showing everything from Lewis Ginter’s exhaustive campaign to gardens still using just Facebook and e-news.  But reading interview responses from all 11 gardens yielded some nice tips for success.

The Huntington Garden describes their use of Flickr: “I’ve created six different Group Pools where visitors can share their photos. One example is our Desert Garden group. Another is our Flowers in Bloom group. ”  They then pick a Photo of the Day from Flickr to distribute via other platforms.

The New York Botanic Garden (another early adopter and on whom Jonah tells me she has a “social media crush”) analyzes data from Four Square to experiment with hashtags on signs in the conservatory.  “We were trying to talk to these techie visitors in their language, and guess what: they loved it! We were inundated with Tweets, Instagrams, Tumblr posts and so much more, and we were able to track them, thank them, and highlight them because of one simple hashtag.”  Wow.

NYBG uses a long list of platforms and they’re “always looking out for the next big thing… We are on all these channels because I think each one offers something different. Botanical gardens are inherently beautiful places, so it makes sense to use Flickr (especially the Group Pool where we get to see how our visitors see NYBG).” 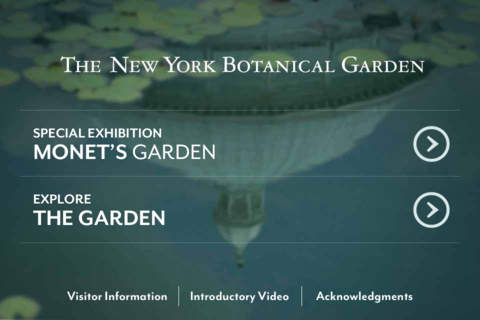 And they just launched a cool new app for visitors, developed under a grant from the Bloomberg Foundation.

What impresses me most about these savvy social media programs is how they’re used to not just attract visitors, but as Jonah explained, to promote a larger plant and gardening community in their city.  On Pinterest, for example, Ginter uses the hashtag #rvablooms to reach a wide community, rva being the popular hashtag for Richmond.  And they reached out to local musicians to contribute music for the garden’s videos, in exchange for credit and a mention of an upcoming performance.

Seems to me that public gardens are the perfect entities to create that community of gardeners in their region and to give nongardeners the itch to try their hand at it.  Inspiration, learning, community – what’s not to love?  Which is why it bugs me so much that so few locals or visitors even know that so many of DC’s public gardens exist, much less think to visit them.  And why we’re experimenting with a teamed social media project for all 16 of our public gardens – coz there’s no one every one of them is going to have a beefy social media program of their own.

Your Public Garden and Social Media

Help your local public garden and gardens in other cities by telling us – do you think they’re reaching the general public, experienced gardeners, foodies?  What do they use and is there another platform you’d like to see them use?