Deprecated: define(): Declaration of case-insensitive constants is deprecated in /home/gardenra/public_html/wp-content/plugins/written/written.php on line 11

Deprecated: define(): Declaration of case-insensitive constants is deprecated in /home/gardenra/public_html/wp-content/plugins/written/written.php on line 12

Deprecated: define(): Declaration of case-insensitive constants is deprecated in /home/gardenra/public_html/wp-content/plugins/written/written.php on line 13 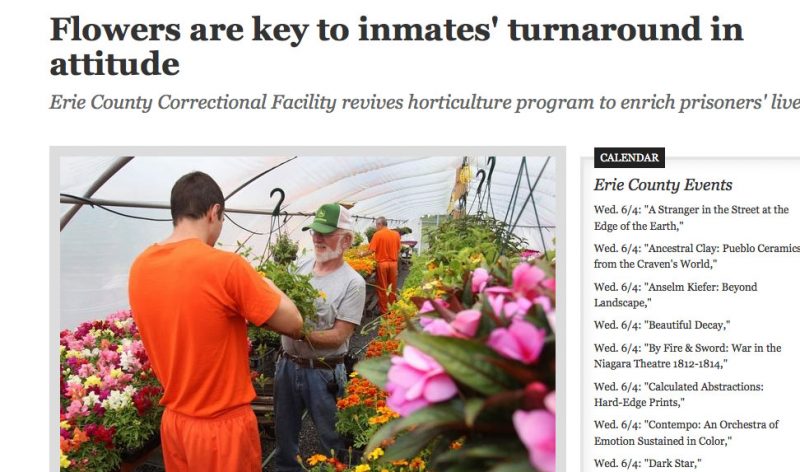 Inside, the colors are radiant as flowers flourish. Rows of yellow and orange marigolds mingle. Baskets of purple Angelonias and white lilacs hang above them. It is a serene sight behind bars.

Many of us already know that dirt makes us happy, even without the recent scientific evidence indicating that certain bacteria in soil have the same effect as antidepressant drugs—stimulating serotonin-producing neurons in a specific region of the brain.

Therefore, it’s hardly surprising that gardening activities in prison, which involve close contact with soil and plants, have, in the words of one inmate, “relaxed me and taught me patience.”

The horticulture program at the Erie County Correctional Facility in Alden, NY started in 1990, and went on hiatus in 2004. It was brought back this year and already has a waiting list. Prisoners tend a greenhouse and put together hanging baskets. They also undertake landscaping jobs throughout the community—at churches, hospitals, and other institutions.

They’re mentally active,” [Superintendent Thomas] Diina said. “They’re performing meaningful work. They’re providing a service to the community. I think, overall, it benefits their mental health in that they’re not just languishing in a jail cell doing their time. They have a sense of purpose.”

I’ve never understood why educational programs for prisons meet with so much resistance. Why wouldn’t it be better to release inmates with some kind of skill that might keep them from getting right back on the merry-go-round of crime and punishment? In any case, I’m really glad that this program has been reinstated.