A scientist studying vegetable pathology at Cornell contacted GardenRant for help in gathering data about a new disease.  Please help out by spreading the word about the need for more info and how to report it. 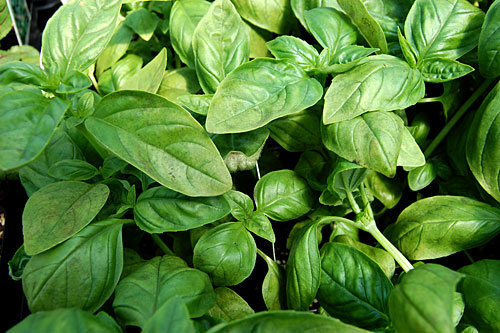 by Meg McGrath
I recently have received several reports of Basil Downy Mildew on plants bought or for sale at big chain garden centers.  Today I found in a store here.  I want gardeners to realize this is happening so they can avoid buying a diseased plant and also be looking and reporting so we know how widespread the issue is.
The diseased plants I saw today looked beautiful – leaves were big, dark green with no yellowing – but there on the underside of some leaves was the characteristic spores of this pathogen.  Symptoms were just starting.  Within a few days affected leaves will start turning yellow and then eventually will die and drop from the plant, but not before the spores have been dispersed by wind to other leaves on the plant and to other plants in other gardens and farms.  Could be just like the 2009 late blight outbreak in the northeast.

Basil downy mildew is a new disease (first reported in US in fall 2007) is one that I think is occurring every year throughout most of the US.  I am looking for help to see if I am correct.

Since I started monitoring the disease in 2009, I have gotten reports from 41 states, providing some evidence that I am right, but the number of reports is not enough to confirm this; for some states I have only one report, and sometimes the report was not confirmed.  No reports have come in from IA, ID, NE, NM, NV, OK, SD, UT, and WY – is this because the disease has not occurred there? or no one has reported it? 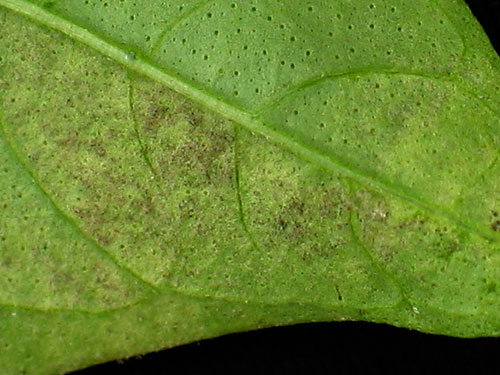 As an avid gardener I know how popular basil is to grow, which is why I am turning to gardeners for help.  Downy mildew has developed on the few plants in my home garden in NY every summer since 2008 (am I the only one this unfortunate?!?).

The pathogen produces an abundance of spores easily dispersed by wind.  A related pathogen causing downy mildew in cucumber is known to move every year throughout the eastern US from south FL where it can survive through winter; both of these pathogens cannot survive in crop debris.  But other downy mildew pathogens do not spread so widely.  Another way the basil downy mildew pathogen gets around is in seed, which is most likely how it first came to the US.  There have been reports of affected plants in stores and garden centers, including this year.

Click here for photos, more information and links to my monitoring pages.

While I am looking for reports, other pathologists working with me on a national project want affected plants for their research on the pathogen.  So don’t despair if your basil becomes diseased – look at it has an opportunity to help further science!

Thanks for your help!