How does a plant that arrives in your garden like a weed earn the right to not be weeded out?  I ruminated on this the other day when a neighbor asked me to identify a new plant in her garden that had arrived without her help. I told her it was Spiderwort (avoiding the rather unwieldy Latin Tradescantia), and her only question was:  “Is it a weed?” 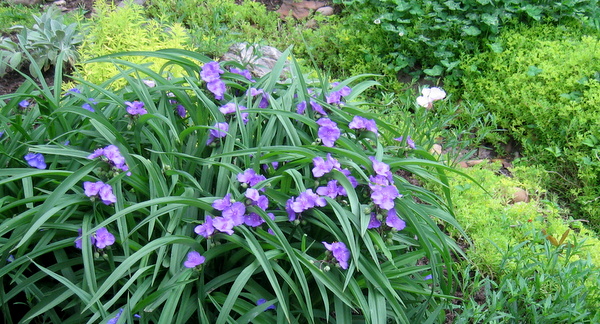 The definition of weed I see all the time is ” A plant growing where you don’t want it,” but I disagree.  I think it’s a plant you don’t want anywhere in your garden or expect to see in anyone else’s garden, either.  Because there are plants that might be growing where we don’t want them (an overly large evergreen, a badly performing rose) but because we recognize them as plants people buy, we don’t call them weeds.   If we get rid of them it’s probably by passing them along to a good home nearby.

(Though judging by some of the items I’ve seen people bring to plant exchanges, not all of us agree on plants worthy of passing along.  Last non-garden-worthy sighting?  A 2-inch oak seedling.) 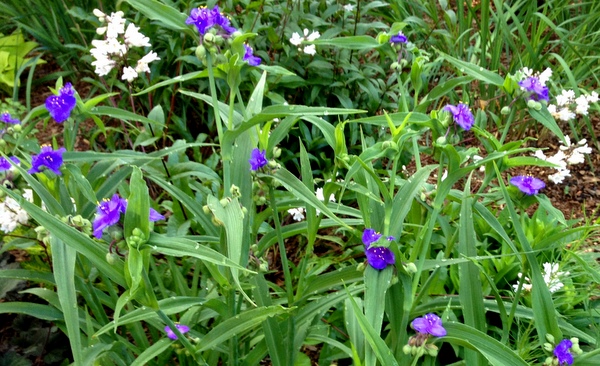 But returning to the good old Spiderwort, I gave it my very best defense as a garden-worthy plant and threw in a growing tip: to hack it back to 2-3 inches after it’s done blooming and the leaves start looking ratty.  New foliage soon appears and who knows – maybe a rebloom or two. 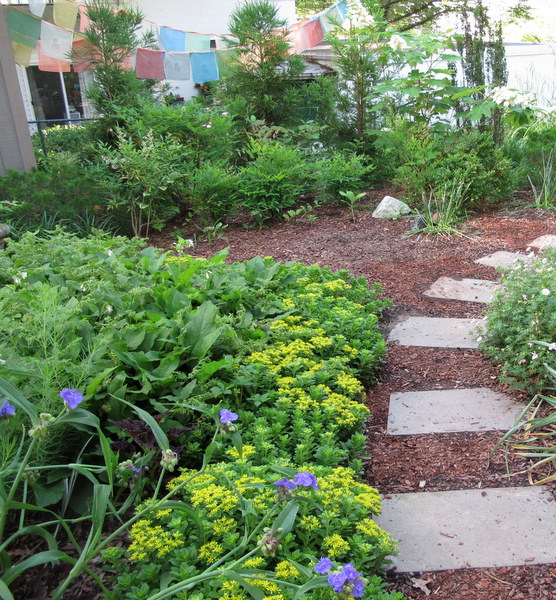 I’ve come to love this locally native volunteer to my gardens – both my former garden in the top photo and my current one in the next two photos, blooming with ‘Husker Red’ Penstemon and Sedum takesimense.  Spiderwort blooms last just one day each but they keep blooming and blooming and blooming.  Anybody know how long?