Cultivate ’14, in Columbus, is the biggest North American trade show, attracting more than 10,000 attendees. The Perennial Plant Association’s (PPA) symposium, in Cincinnati, drew 400. At Cultivate ‘14, Jelitto Perennial Seeds (my employer for nearly twenty years) is a small fish in a big sea of annuals, woody plants, plastic pots and new equipment. At the PPA’s symposium we are among our people—growers, gardeners, academics and enthusiasts of every stripe—all crazy about gardening. Perennials play a big part in that.

P .T. Barnum once said, “Without promotion something terrible happens…Nothing!”

Many of the 2015 wholesale catalogs were freshly minted before the shows began, so the annual glorification of new introductions could flourish.

The ground is shifting underneath the Green Industry. It may no longer be enough to sing the praises of untested plants and hope the public buys the hype. The current logic seems to be: If many of the plants don’t perform, then next year there will be more new introductions that might.

To wit, Tony Avent, of Plant Delights Nursery, during one of his two PPA talks, said, “I don’t trust breeders, and I don’t trust marketers.” Avent trials hundreds of new plant introductions before he can say, with authority, that they will grow in Raleigh.

How long will it take before the retail gardening public becomes gun-shy about gardening and moves onto Pilates and yoga?

Wait a minute. Many of the Boomers have moved on.

While Baby Boomers downsize and pursue other hobbies, growers and retailers struggle to figure out how to make room for Millennials (young adults, aged 18-35). While consumer sales have recovered from the bottom of the recession, plant sales have flat-lined.

There are, according to Kelly Norris, 7,000,000 more Millennials than Baby Boomers. The Millennials have different expectations from the Boomers.  It’s no longer business as usual. (Note: There’s never been anything usual about growing and selling plants. It’s a tough business.)

“Why can’t there be a new experience?” Kelly Norris wondered. Norris is a creative, horticultural dervish. The 27-year-old is the Greater Des Moines Botanical Garden’s Horticulture Manager. He is tireless and on a mission.

What did he mean, where’s the wow? I don’t want to brag, but my longtime employer, Jelitto, offers over 3,700 different seed items—the bulk of them perennials, yet there are lots of ornamental grasses and herbs, too. We have very loyal customers but are constantly thinking of ways to grow the business. I’ve long thought we’ve got something for everyone.

OK, maybe we don’t have something for everyone. 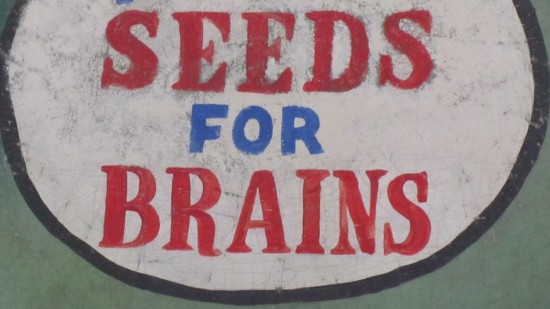 Norris explained the percentage breakdown: “The target retail gardening audience equals those that are interested (20%-30%) and those that are not—the overwhelming majority.” It’s foolish to try and grow a market with those who are not interested. “We chase after those that are not…like a foodie restaurant trying to lure fast food junkies,” he said. It’s a waste of time. Norris, wise beyond his years, urged retailers to focus on the 20-30 %.

“Brand spanking new,” in recent years, has taken on new meaning with a proliferation of horticultural marketing brand names. And year after year it’s always more petunias, heucheras, echinceas and “stuff.”  Millennials, most of whom are new to gardening, are not as brand-loyal as the Boomers. They’re savvy with social media and skeptical of hype. 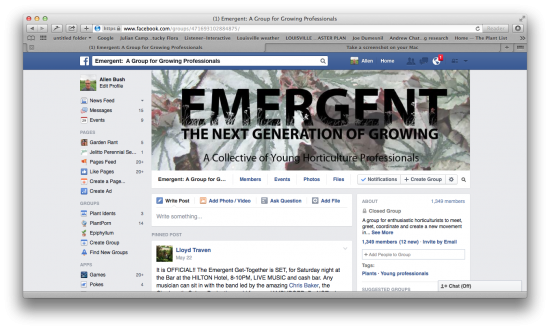 Norris asked an estimated 50 conference-goers in the early morning on the last day if they had seen anything at the show that they thought was truly innovative. Not a hand was raised. There was a lot of good “product” on the show floor but nothing that knocked anyone’s garden boots off.

Norris always seems to encounter plants that “wow” him, wherever he goes, but he’s not your average gardener. The white flowering Silphium albiflorum, a rare species endemic to three Texas counties, came into bloom in late July.  Norris said in an email, “I bought a 2-yr old seedling from Ellen Hornig [owner of the former Seneca Hill Perennials] back in 2010 and it bloomed this year. Some days it seems like it was twice that long—the anticipation!”

But Norris is not typical. He’s an avowed plant geek. He gets it and doesn’t mind waiting years to get a bloom. The young Millennials don’t get it, not yet. They want color now.

But Norris said there’s a stumbling block: people, plants and passion don’t automatically translate to sales… We are a passionate, talented industry and there’s an audience who want that.”

So what do we do?

Norris said we cannot be complacent. “We must be revolutionary, we must be stylish.” Offering examples, he said, “Green roofs, vertical walls and outdoor rooms have become transformative.”

Norris discovered BÖ, by Mansouri, the innovative wooden, handmade bow ties online. He was fascinated and ordered one with a couple of clicks. “How many of you can order plants this easily?” he asked. (I ordered one the next day.)

“The Millennials are visual and environmentally conscious,” Norris preached. “Excite and innovate.”

A Chihuly glass exhibit, currently at the Denver Botanic Gardens, has been exciting and innovative. Nurseryman Brian Core of Little Valley Nursery in Brighton, CO, visited the Denver Botanic Gardens in late July. He commented on Facebook, “Installing Dale Chihuly’s art was sheer genius. It couldn’t have been more spectacular!  The gardens have an energy this year that I’ve never felt before. The crowds are huge, obviously with many people who have never visited the gardens before.”

Every plant has a story, and Norris knows that “marketing is storytelling.” We underestimate the “essentiality” of plants and gardens. He is convinced that gardeners have an opportunity to be canonized like today’s top chefs.