Many of us have a love/hate affair with gardening advice and essays that come from across the Atlantic.  There is always love, of course, for this mothership of great estate gardens, internationally known garden events, and giants of gardening design and literature like  Gertrude Jekyll, Christopher Lloyd, Dan Pearson, and so many others. The hate, sad to say, is mostly from jealousy; though gardening is not as popular as it was across the pond, it still seems much more in the mainstream, with more and better periodicals and even some decent TV programs. And there’s also a little zone envy for a climate that allows the gardener to work pretty much year-round, without getting scorched or frozen.

Sooner or later, most of us will make the pilgrimage to see the great English gardens—I saw much of Somerset ten years ago and long to return to visit other hot spots. Until that time, however, I’ve got some big coffee table books, and this compendium of writing from the Telegraph, Of Rhubarb and Roses: The Telegraph Book of the Garden. It was sent last December and I’m just now getting to it. 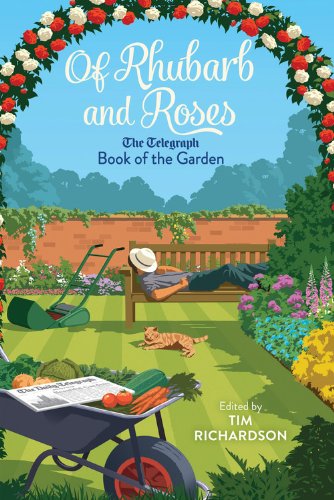 The Telegraph has been publishing gardening columns since the fifties. There are 18 thematic sections with charming quotes used as titles—There are at least four wrong ways to grow daffodils,” and “You do not expect to find innocence by the end of summer.” The writers are everyone you’d expect, from Vita Sackville-West to Sarah Raven to Beth Chatto, and many other familiar names (even an essay on snails by Germaine Greer).  The short essays are usually funny and opinionated, often eccentric, and entirely lack the generic blandness of most American newspaper gardening advice.

However,  I also have a love/hate affair with the Telegraph. True, it is a reliable source of garden-related matter, much of it quite good, as this book demonstrates. But a lot of the stuff I find there these days is just nuts, with the nuttiest articles being published on the topic of native plants. In Jane Milliman’s Ear to the Ground newsletter this week, she points to an article warning of the “deadly toxins” being spread by the UK’s current Grow Wild wildflower planting campaign. (Yes, many, many plants are toxic; this is why we don’t eat random plants unless we know they’re edible—and maybe not even then.) A few weeks back, I actually saw an article there claiming talk of protecting native species was “quasi-racist.”

In fact, you can usually count on finding sensationalist content in a lot of the Telegraph’s content these days. At least as far as gardening goes, I’d recommend keeping to the standard set by Of Rhubarb and Roses; I’m looking forward to whiling away the cold months with this one.