Thanks to a couple of fascinating new releases from Frances Lincoln, Katie Campbell’s British Gardens in Time and George Plumptre’s The English Country House Garden, I’ve beginning to add some dimensions to my starry-eyed reverence for the great English gardens. The reverence is still there, but now it’s accompanied by a little bit of understanding. Mainly I’m understanding that the creators of these living masterpieces—many of them, anyway—were ruled by strong and occasionally bizarre obsessions—and that how you gardened—just like today—told people a lot about who you were. I already knew, though really did not appreciate, what a huge effort it was, and still is, for private owners or organizations like the National Trust to restore and maintain these properties, many of which had almost completely been obliterated before they were rescued and reconstructed.

Some of the more intriguing bits:

• Stowe, one of the great landscape gardens of the 18th century, is filled with political allegory as well as “naturalistic” vistas. Among the ornamental temples and monuments scattered about the place, some represented ancient virtue (the Greeks) and some modern political vice, including one which pointedly ridicules the prime minister of the day, Robert Walpole.

• One of the great Victorian gardens, Biddulph Grange, is filled with exotic specimens collected from all over the planet, but its owner, although he attempted to chart the evolution of the world through geology and plants, was a creationist and even disapproved of hybrid plants.

• Landscape gardening was not kind to anything that got into the way of its large, sweeping gestures. Entire villages were removed by Capability Brown, if they got in the way of a design. The idyllic naturalistic landscape was thought to evoke the concept of liberty, but, as always, the question was whose.

• Visitors to such sites as Lullingstone castle or Scampston Hall will find plenty of the new as well as the traditional, including Piet Oudolf’s walled garden at Scampston and Hart Dyke’s World Garden at Lullingstone.

The books are perfect for the winter armchair or for anyone planning a tour—especially if you’d prefer to go on your own rather than take one of the many packaged offerings. I had not heard of many of the properties described here, and they inspire one to look beyond the usual round of Sissinghust, Hidcote, and Great Dixter. 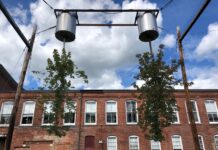 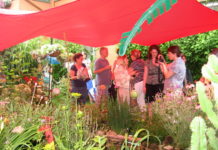