It was cold in Louisville last week with morning lows near zero and daytime temperatures struggling to reach the 20s. Rufus had to do his business a half-dozen times each day. That meant I bundled up in four or five layers of clothing to go outside. 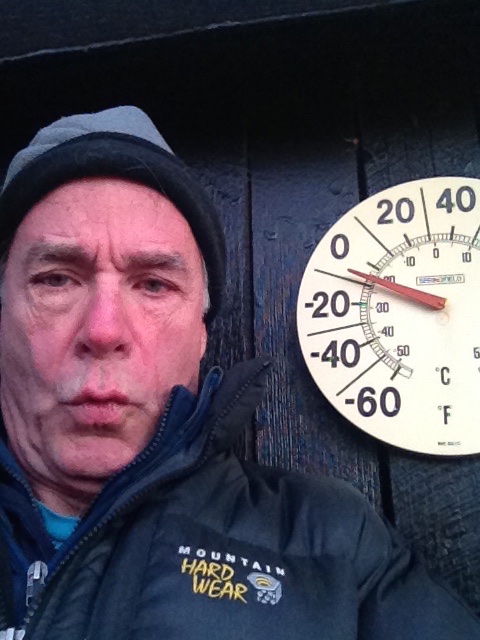 There’s plenty in the garden to interest us both, even if we have different pursuits.

These walks have gotten me into the garden and around the neighborhood a lot more this January than in years past. Rufus, who is one-half Jack Russell and the other half miniature schnauzer, likes to roam. So do I.  And I never know what to expect. One day he got tangled in my favorite bamboo, Sasa veitchii. I wonder if he sniffed a mole?

And he didn’t seem the least bit interested in the bright red fruit on the shade-loving, Chinese sacred lily, Rohdea japonica. They’re hidden deep in the leathery, evergreen foliage.  I find the berries charming, but Rufus could care less.

Dogs and kids roamed free when I was a boy. Back then, dog owners never picked up any mess. My neighborhood was a minefield. It was hard to avoid stepping in it. My mother, a fussbudget homemaker, made sure we scraped anything that stuck to our shoes before we came inside.

A stubborn streak overcame me when we first got Rufus, three months ago: “Don’t tell me what to do!” Not on my life, I thought, am I going to pick up a pile of dog crap. Certainly not in my garden, or, I thought at first—anywhere else.

“Have at it, boy!” I said when Rufus fancied a curbside ivy patch. Why should I be kind to a weed so vicious that I’ve spent nearly 20 years trying to rip it out of my own garden?

And we know where the neighborhood groundcovers of wintercreeper, Euonymus fortunei, are, too. What a nasty invasive plant. It doesn’t begin flowering until it starts climbing into Kentucky’s trees. And then it only gets worse. Seeds are spread hither and yon. The vining plant chokes the woodland floor and climbs as far as it can and strangles trees to death.

I’ve tried to tell a few neighbors that they’d be wise to get rid of their wintercreeper but they think it looks nice. I lapsed into Libertarian and never made a big deal about their invasive weeds. On the other hand, it didn’t bother me, at all, that Rufus chose their strips as his precious depositories.

On these first few outings, even if Rufus was doing everyone a favor by leaving his mess, I looked both ways to be sure no one was looking. We walked away from each steaming pile and didn’t look back.

After a few weeks, I became conflicted but found support from a neighbor with a beautiful Labrador. I told him that I hadn’t warmed up to cleaning up my dog’s pile. He said, “Don’t worry, we’ve been dropping bombs in your front yard for years.”

Figuring there was more neighborhood solidarity for wayward dog owners than I’d thought, I boldly confessed to one of my more evolved neighbors. He turned me around and said, “You’ll be sorry.”

Before readers get ready to fire off excoriating responses: I promise that I’ve somehow evolved.

Now I carry a few cleanup bags. Really, I do.

Here’s to you, Sweet Virginia!