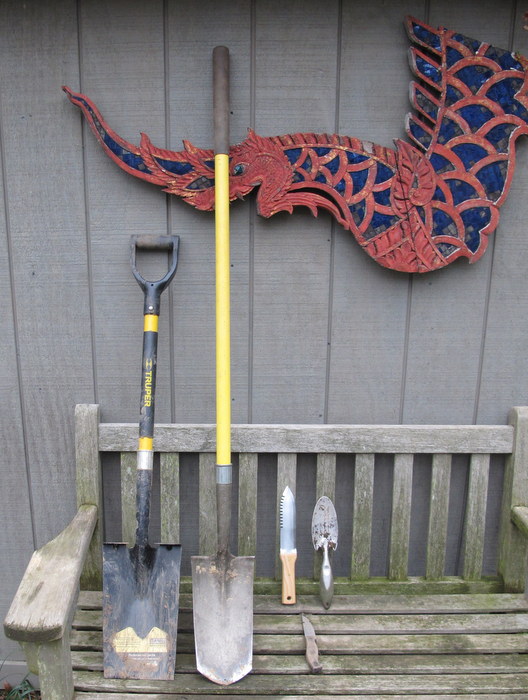 Avid gardeners, I bet you love your tools as much as I do, especially the ones for digging. Gloves I buy by the dozen but digging tools I expect to last forever, which of course they don’t.

I recently destroyed my long-handled shovel by treating it like it was a crowbar, expecting it to extract something big and heavy by brute force. The wooden handle punished me for my misuse by splitting in two. I’ve since reminded myself that shovels are for cutting and then lifting, not doing both tasks at the same time. I replaced it with a short-handled spade, which cuts, lifts, and edges, too.

For digging up smaller plants I love thin long-handled shovels like the one here in yellow that’s lasted me a few years.

Down on my knees, where most of my gardening action seems to take place, I rely on Japanese weeding knives, pointy trowels that cut while they’re digging, and cheap steak knives for dividing perennials.

In this recent photo they’re all muddy, except for the fresh-from-UPS weeding knife. It’ll be dirty soon enough.

Oh, and my pickax is great when extra muscle power is called for.  I swing the thing from a kneeling position.

So how do we learn to dig?

I’ve been pondering this question since observing some nongardeners attempting to dig, and realizing that it’s not exactly an innate skill. I noticed their frustration in trying to dig up and replant perennials because they weren’t holding the tools the right way, or were attempting the job with the wrong tool altogether.

Do books and magazines teach the art of digging? I think not. Neither do blogs. It’s something you have to be shown, as my mother must have shown me when I was a kid weeding the family garden. But without a gardening parent, how DO you learn? Maybe by hiring a coach, or becoming a Master Gardener and volunteering alongside experienced gardeners.

Or these days, with the help of Youtube, where I found this video, in which a landscaper declares that “Having the right tool is a big, big deal,” than surprises me by recommending tools I don’t use. Hmm.

Then this guy demonstrates how to dig with a pick and shovel using a method that would KILL MY BACK in no time. Also, he named his video “How Too Use Pick and Shovel propper tool use.” (Double sic!)

This woman likes garden forks for turning soil and demonstrates two styles different styles of cultivators (who knew?).  But she only uses trowels for the flimsiest of jobs –  digging in fluffy potting soil – and says any basic trowel will do. I disagree! (Her video does get right to the point though, something that Type A’s like myself appreciate.) In fact, not a single Youtuber surveyed demonstrated my favorite trowel method for tougher jobs – with the trowel facing the me and being maneuvered toward me.

A few videos later, I’ve reluctantly concluded that maybe I DON’T know the best garden tools for every job. But I manage to do what needs doing, without hurting myself, and that’ll have to suffice.