You know what they say about perennials – that in year one they sleep, in year two they creep and in year three they finally leap. So let’s see how that’s working out in my new(ish) garden. 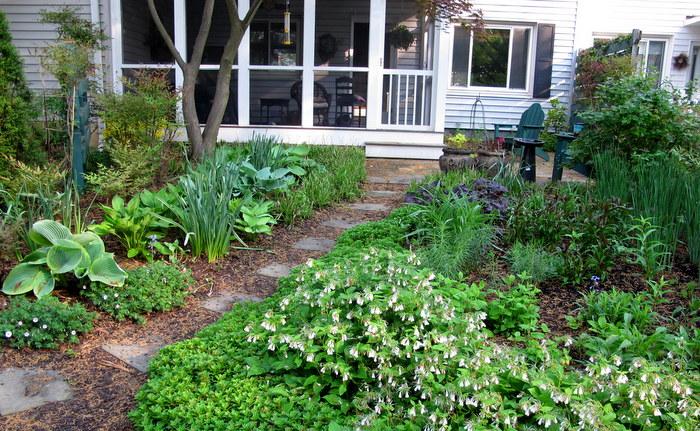 Even with a small townhouse garden like mine, going lawn-less is much easier with the right groundcovers, and I’ve found a few.  The photo above shows ‘Johnson’s Blue’ Geranium on the left, then Sedum takesimense (not blooming yet) with lots of Comfrey a neighbor gave me, seen blooming like crazy behind it and covered with bees. The geranium isn’t a big leaper in my garden but thankfully the Sedum and Comfrey are.

Other perennials are leaping only in the sense that they’re large enough to be divided – like the Penstemon ‘Husker Red’ and  Tradescantia virginiana seen behind the groundcovers. My three Amsonia hubrichtiis are slowly getting bigger and the Echinaceas have neither leapt nor grown large enough to divide, but a friend gave me her extras, so finally this border will, I think, look full this year. The back of the border is already full thanks to a tough-as-nails passalongway from a former neighbor  – Siberian iris. 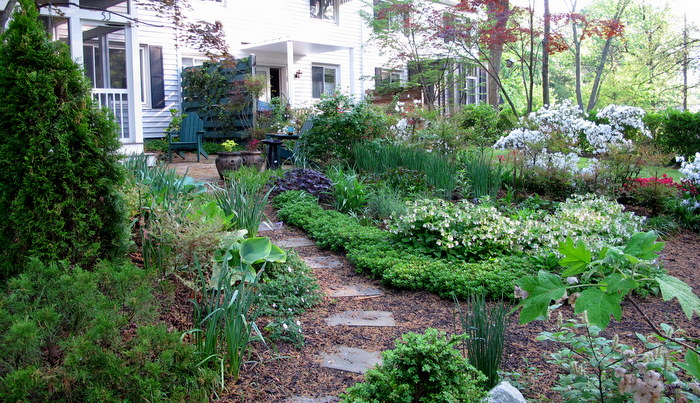 Above, the view entering the garden from the rear sidewalk. I recently added a Redbud at the back of the border, but it’ll sleep for a while. 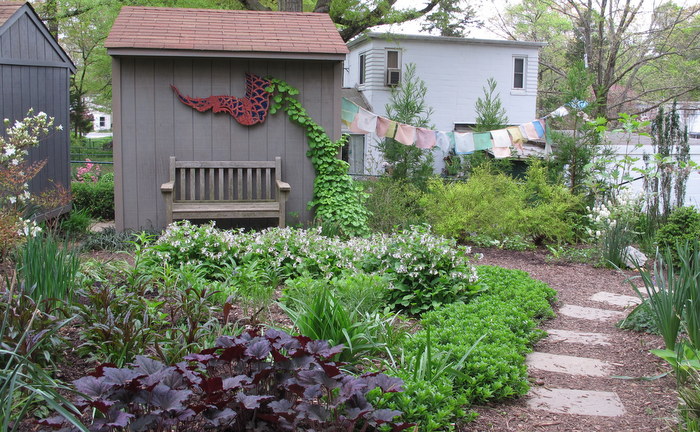 Above, the view from my patio offers a close-up of a great-performing perennial – Heuchera ‘Frosted Violet,‘ recommended as a longer-living purple than many other cultivars. So far, so good.

I can’t resist mentioning the ‘Ogon’ Spireas that I recently moved to just in front of my ‘Yoshino’ Cryptomerias. The Ogons looked fabulous blooming with daffodils, after which their chartreuse, willow-like foliage is just as pretty and lasts well into November. On the right it’s shown with some Pulmonaria that I brought from my former garden and have moved many times since then.  It scoffs at the abuse. 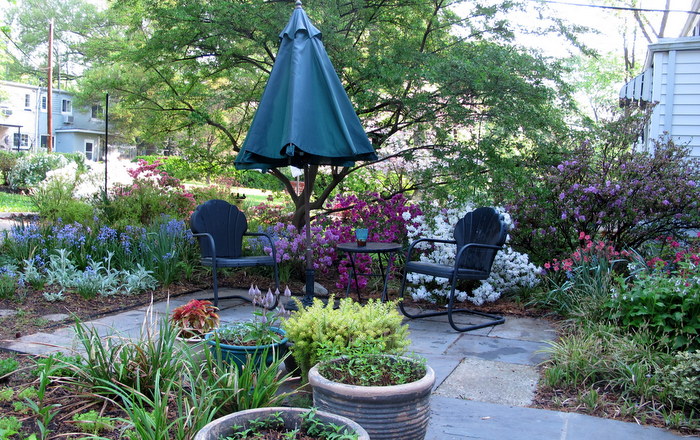 Perennials in my front yard are lagging in their leap year but good old azaleas are taking up the slack, at least for now. Later, the greatest leaper of all – Black-eyed Susan – will dominate.

Jealous?  Me?
So here’s my question for Evelyn – how the hell did you get your garden to look like that in only one year?