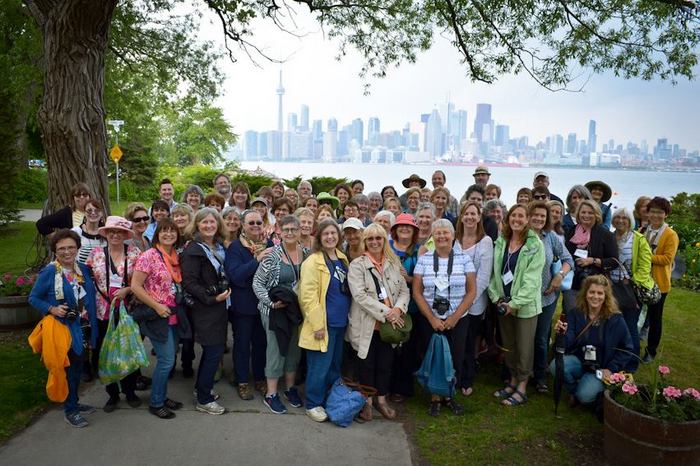 First, the Gardenblogger Fling happened last weekend in Toronto and was a roaring success.  Thanks again to the local organizes, who created 4+ fabulous days of events and then herded us through it all as patient, unfrazzled hosts who managed to have fun themselves.  That’s Helen Battersby of Toronto Gardens, Lorraine Flanigan of City Gardening Online and Veronica Sliva of A Gardener’s World.  More posts coming about what we saw and did at the Fling.

There’s a Toronto-area blogger who’s surely been at it longer than any of us, having started back in 2000, and that’s Gayla Trail of You Grow Girl.  She spoke to us one evening at our hotel and I took fast notes.

For the first few years You Grow Girl was a webzine for which Gayla did all the coding, and there were other contributors, but within a few years it became the single-voice popular blog we know it as today.

Bored by the mainstream garden media’s focus on older people with money and displays of wealth and status, Gayla set out to be a dissenting voice. (GardenRant founders came to the same conclusion a few years later.) Still in her 20s, she’d become obsessed with gardening (then on a rooftop and at the nearby community garden) and wanted to connect with other people like herself.

I related not just to Gayla’s subversive approach (You Grow Girl’s tagline is “Gardening for the People”) but also to her focus on blogging for fun, for self-expression, and for enjoying the freedom that personal blogs afford the writer.  (“Don’t write a blog to be popular” and “People will always try to knock you down.”)  Despite her success, she still asserts that “I’m not an authority and I don’t want to be one.”

Also despite her success, she’s found gardenblogging to be a really “tricky niche” that basically doesn’t pay (especially if you want to hold onto your integrity).  She accepts no products to review and no advertising besides Google ads – and even with Google she’s had to block the whole advertiser category of “gardening.” She told us she’d never take money from Scotts Miracle-Gro.

After attending one BlogHer conference she concluded that it wasn’t for her – because it was all about monetizing. “I guess I’m working for freedom.” Anyway, focusing on SEO leads to inauthenticity, and that kills the fun of blogging in the first place.

She’s also wary of the many offers of “exposure” that gardenbloggers receive in return for unpaid work. “People die from exposure.”

Gayla’s tips for writing on garden blogs include “Be transparent” and “Show your mistakes. You’re not killing hamsters. It’s okay.”

Where do Gardening Blogs Stand Today?

Curious about whether gardening blog are increasing or decreasing in number, I asked Pam Penick, chair of the Fling Committee, but she told me she didn’t know the answer – because Blotanical doesn’t exist anymore.”

Blotanical!  I remember it as the great meeting place online for gardenbloggers from around the world created by Aussie Stuart Robinson, whose April Fool’s post on his own blog about GardenRant being sold for $1.3 million fooled plenty of readers.  I miss Blotanical, and I’m not alone. Google the name and you’ll find lots of laments over its demise.

I see a few garden blog directories still online, but they’re either out of date or purport to list just the “best of.” Unless a directory is all-inclusive, what’s the point, besides maybe charging bloggers for the exposure.