My excitement for wild plants is as far afield from Mad Max: Fury Road as you can imagine. My best botanizing adventures, by comparison, would be more like an open-air My Dinner with Andre. An afternoon with my plant-obsessed compatriots would bore the bejesus out of most Americans or, for that matter, most of my friends. But even if we are a little mad, our favorite landscapes are not “steampunky dystopian hellscapes.” The best wild areas are quiet retreats that inspire our souls and our gardens.

I wrote last month about my four-year-old make-believe prairie odyssey. A few days later, I visited a Kentucky prairie—the real deal—near Cecilia, Kentucky, with three friends. We poked along at a snail’s pace, sometimes on our hands and knees. We were looking for unusual native perennials, grasses, sedges and even a few trees and shrubs. We weren’t disappointed.

While Mad Max fights for survival in an apocalyptic world, Dee Ann Peine and Hilary Cox study the quiet nuances of a Kentucky prairie.

Dee Ann Peine works at the Indianapolis Airport Animal Emergi-Center. When she’s not tending small, domestic fauna, she turns her attention to wild flora.  Dee Ann got tipped off in 2006 about the Kentucky prairie from a friend with a relative who owned the property. Dee Ann knew she’d hit pay dirt.

She returned the next week with Hilary Cox, author, photographer and garden designer, formerly of Indianapolis and now living in Tucson, Arizona.

Dee Ann and Hilary can barely hide their enthusiasm for their adopted Kentucky prairie project.

Together, in over 50 visits, they have recorded and photographed what is growing here. Echinacea simulata, Hypericum dolabriforme, Thaspium chapmanii and Viola pedata are among the dozen species from the Kentucky prairie that they have sent to the Millenium Seed Bank for safekeeping.

Julian Campbell, a talented botanist with an impish grin and bushy eyebrows, joined us. Julian could be the model for a John le Carré cold war spy character. One problem: He’s not at all cloak and dagger. His deductive reasoning and plant know-how are superb, but he loves nothing better than to share his profound knowledge of Kentucky plant species. He’d make a terrible spy.

Julian and I met in Louisville on a gorgeous mid-May morning and drove down to Hardin County together to meet Dee Ann and Hilary. Julian, a Lexington resident, has scouted the Commonwealth from stem to stern since 1972, but he hadn’t seen this site.

Dee Ann and Hilary first showed me this bona fide Kentucky prairie, in the karst limestone region called the Barrens, near Mammoth Cave, last August Although, this prairie occasionally has been cut for hay, it has never been plowed.

I knew very little about prairies 35 years ago. I’d spent my early career in horticulture tucking perennials into neat and orderly borders—English style.

Joe-Pye weed changed all of that. I imported an improved cultivar from England in the early 1980s. It looked scarcely different from what was growing during the summer along roadsides in Western North Carolina, where I was living at the time.

I mentioned to my friend Pamela Harper, author and gardener, that I couldn’t understand the fuss over the English Joe-Pye selection of Eutrochium (Eupatorium) maculatum. Pam is English to the core (as are Hilary Cox and Julian Campbell). Though Pam has lived in Seaford, VA, for years, she insisted that the Joe-Pye weed must be a better cultivar. It was, after all, from England!

Thus the Joe-Pye weed, with English cachet, came into being here in America. And with that came acceptance of a common American roadside plant, along with the recognition that there might be new garden opportunities for other native plants such as ironweed and goldenrods that had long been ignored.

Kurt Bluemel and Wolfgang Oehme opened my eyes further in the late 1980s. The legendary German gardener and writer Karl Foerster had inspired them as they dove deeper into gardening, while starting their careers in Europe. Even before they emigrated, Bluemel and Oehme had loved our native North American plants. Once they arrived in Maryland, in the early 1960s, the two men began preaching about a new American garden design style: Why dither around with ones and threes of this and that when you could plant huge sweeps of dozens or even hundreds of rudbeckias, echincaceas and panicums?

Their influence, and my evolution from devotion to orderly English gardens to something a little more rambunctious (but not too Mad Max) made me look closer at nature. Now, I am more observant in prairies, the woods and my backyard.

I felt a tremendous thrill when I collected a few dark brown seeds of glade cress, Leavenworthia uniflora, a tiny mustard family relative, lying on an exposed limestone slab. I’d never heard of it and wouldn’t have seen it if Julian hadn’t pointed it out. 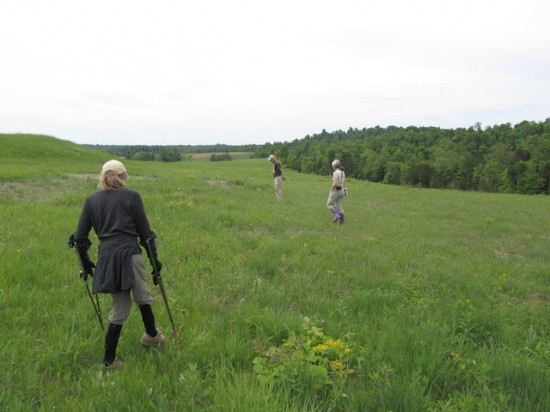 Talk about mad! Still, I knew better than to rush into the Elizabethtown, Kentucky, convenient store on my way home and boast about Leavenworthia to the counter clerk.

When I got home, Rose didn’t seem too interested, either.

No matter. No one can take away my not-so-mad day of adventure in a real Kentucky prairie.