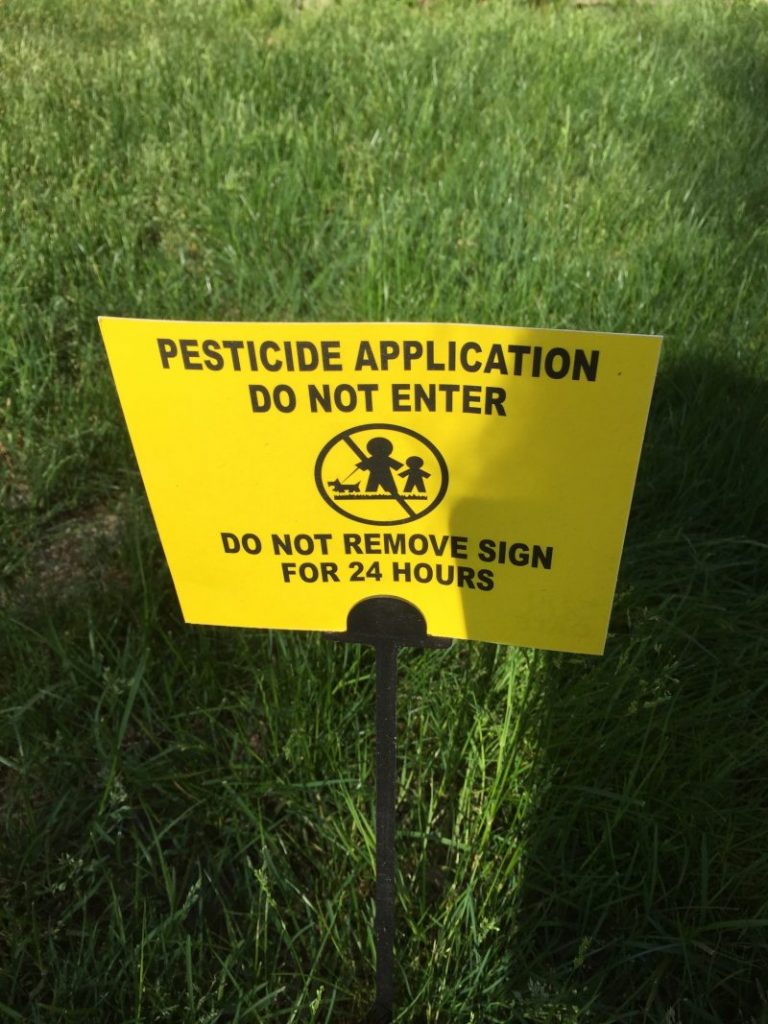 The first one is a common sight along just about any American street. Over the years, I’ve grown accustomed to these. As a kid, I knew enough to think, “poison, stay away.” As an adult and a longtime gardener, I look at the signs with annoyance and some disgust, but often just dismiss them from my mind.   But in recent years, as environmentally mindful policies prevail in places like Ontario to the north and homeowners struggle with the idea of giving up turfgrass entirely to the far west, it seems more ridiculous than ever that people would prize their velvet lawns enough to endanger living creatures and pollute groundwater. The water question is very real here in Buffalo, where runoff overflow from overly abundant rainy seasons threatens waterways, local swimming, and drinking water.

This particular sign was planted in the grass of a nearby pre-k/daycare center. Although it says “pesticide” I feel fairly certain it’s for weeds, and it’s probably also likely that a landscaping company did this automatically, as part of their “service,” and that the people who run this center are barely aware of what’s being done. We were asked if we wanted to have regular “treatments” when we moved into our house, but declined. As long as lawn services exist, the culture of regular treating and spraying is unlikely to go away.

This sign is a more recent phenomenon. At least it’s there. But it’s far too early to be implying neonicotinoids are safe because they’ve been “approved by the EPA.”  In fact, risk to pollinators seems likely, and they are still under assessment by the agency. (Lots of studies going on and lots of  reports—google away.) So, yeah, on the surface this sign is a public service, but it’s a bit misleading. And the link given no longer exists.