First, I recommend to you Adrian Higgins’s recent love letter to ferns – Fronds with Benefits:  A Guide to Ferns.  The article includes his favorites, a tour of the ferns at Chanticleer Garden, and some reasons for their growing popularity – they’re easy, untouched by critters and disease, and make a garden look both primal and sophisticated.

All this fern talk got me photographing the ones in my garden, starting with the Autumn Fern ‘Brilliance’ that Adrian includes in his five favorites.  The two plants on the left are full-grown after two seasons and on the right are some of the 20 new ones I planted this spring.  The next photos show why I did that.

These shots taken in February and March prove that at least here in Maryland, the Autumn Fern is truly evergreen and only slightly tattered by repeated dumpings of snow. That’s in contrast to the hydrangeas seen growing alongside them in this shady spot. They looked great for a few weeks, passable for a few months and then terrible all winter in this spot just outside my living room window. With no regrets I gave the Hydrangeas away at our spring plant swap.

The other fern I grow is the Sensitive fern (Onoclea sensibilis), shown here where my back garden slopes down to a well-used inner sidewalk running through the neighborhood. Sensitive fern isn’t evergreen but it IS free, arriving here as a volunteer, and it’s native in this region. I’m allowing it to replace the very boring hostas that once dominated this bank. The ferns complement the evergreens without competing with them. 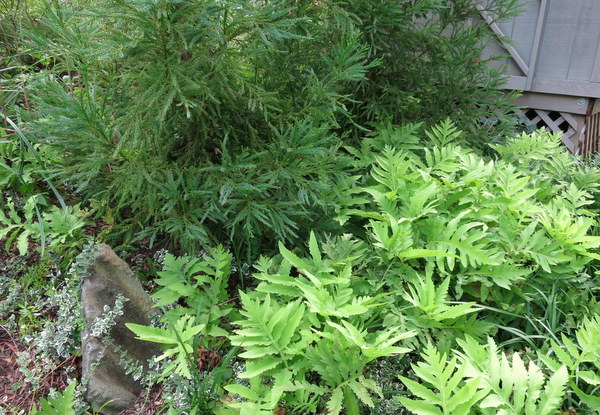 Speaking of the evergreens here, the three ‘Yoshino’ Cryptomerias are quickly becoming too big for this spot and have got to go. I confess that I was in a hurry to block an ugly view and simply chose my favorite fast-grower. Just three years later, it’s time to replace them and with what, I’m not sure.

It’s rather humbling to make gardening mistakes like this after 40 years of trial and error.