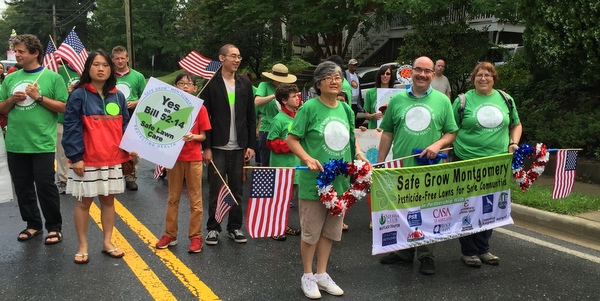 Readers may remember news that the first town in the U.S. had banned lawn pesticides on public and private property, just two years ago, followed by news of the campaign to make the ban countywide (the town being Takoma Park and the county, Montgomery County, Maryland).

Well, this month the county-wide ban PASSED – the first in the U.S. From the press release:

Property owners have a right to maintain their own property, but they do not have a right to inflict harm upon their neighbors. Residents will still be free to hire any lawn care professional to treat their lawn or to manage their own lawn care, but they can do so now with the confidence that their family will be better protected,” said Council President George Leventhal.

I love how he puts a positive spin on what opponents regard as a reduction of personal freedom. That’s George in the photo above, behind a banner in the 2015 Takoma Park July 4th Parade.

So how did this happen?

85% (over 4700) of all letters and petition signatures received by County Council supported Bill 52-14. The Bill was backed by overwhelming support from residents, families, health professionals, CASA de Maryland, Montgomery County Council of PTAs, and the Safe Grow Montgomery coalition of over 40 other local organizations and businesses, including the Montgomery County and Maryland Sierra Club, watershed groups, Physicians for Social Responsibility, Beyond Pesticides, and many more.

It also happened in large part because of these two young mothers.

Though not JUST young mothers, and Catherine urged me to mention that the county effort was led by “a group of diverse people, coming from points of view including pet owners, environmental activists, grandparents, and dads.”

So is the battle over? Too early to know. The county executive has to sign the bill, which will happen (or not) this coming Monday. Municipalities within the county can all opt-out if they choose, so lobbying continues to make sure that doesn’t happen.

The industry lobby Responsible Industry for a Sound Environment (RISE) was naturally a huge opponent. (And like the word “wholesome” in food marketing, what the hell is a “sound environment”?)

One important environmental group in the county declined to support the law because they wanted to continue to use herbicides to kill invasive plants – though that use was clearly exempted from the law.  And Catherine tells me the county’s “parks department hates this” and worked against it.

But others continue to rally to the cause and one organic turf consult, Chip Osborne in Massachusetts, is offering his services to the county free of charge.

So will this go nationwide? Not any time soon. A whopping 43 states have laws banning any county or city pesticide restrictions that go farther than those imposed by the state. The pesticide and lawn-care industries have been very busy, and very successful.