If your neighborhood is anything like mine, there are plenty of neglected apple trees, trees planted by optimistic home landscapers and then more or less abandoned when the owners learned that producing blemish-free fruit requires a strict regimen of sprayings.  Blemish-free fruit isn’t necessary for cider-making, of course, and my experience has been that the offer to share a gallon of cider will usually gain you access to all of such fruit as you can use.

I try fruit from different trees until I find some with a lively flavor.  Then I use the scavenged apples as a base for cider-making, enhancing them with the small but tart and flavorful fruit from hedge-row apples I find growing along abandoned fields and maybe some crabapples to add extra tannin.

For a finer vintage, I have located some surviving trees of old fashioned apples that traditionally were grown specifically for cider-making, including one huge old ‘Golden Russet’ that every second year produces bumper crops of small, rough-skinned yellow fruits that make a glorious cider all by themselves – this juice I generally save for fermenting into “hard” cider. 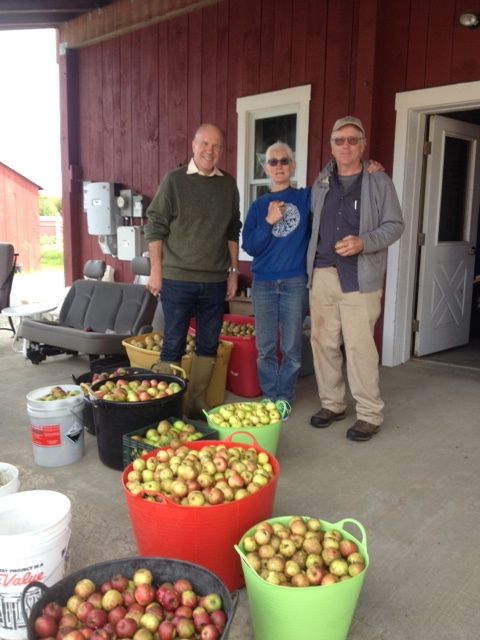 The ‘Golden Russet’ apples ripen late, in early to mid October, which is a characteristic they share with many other outstanding cider apples.  In fact, it is a good idea to make a special scout for apples about now – what you find ripening during this later part of the season will tend to yield the richest juice.

Another example of a desirable, late-ripening apple is the ‘Baldwin’, a once very popular variety that still persists in some older commercial orchards and which adds authority and tannin to cider when blended with sweeter, less complex fruits.  West County Cider, a maker of hard ciders located in Colrain, Massachusetts, makes a pure Baldwin vintage cider that is delicious – look on its website for retail outlets.

The most useful reference about heirloom cider apples is The Apples of New York State, by S.A. Beach, which was published in 1905.  It provides descriptions, including the value as cider apples, of the roughly 1,000 apple varieties then grown in New York State.   Most of these are no longer available, but a surpising number of varieties can still be found if you are persistent in your hunt through old orchards. Over the years I have found everything from ‘Rhode Island Greenings’ to ‘Roxbury Russets’ and ‘Gravensteins’, all of which contributed to memorable ciders.