Does your garden have a focal point you’d rather not see, one that’s not on your property so you can’t change it? I do – a neighbor’s storage area – but co-op rules prevent me from blocking it with, say, a lattice, and the space is far too small and close to a sidewalk to use conifers to do the job.

Like my fellow co-op members, I’ve had to get creative in my quest for screening, and after several failed attempts at solutions I’ve found that prayer flags do the job – at least temporarily, until they become so tattered they need to be replaced. But their impermanence is just part of their charm. The more tattered and faded, the prettier, to my eyes.

But they’re about more than blocking views and looking pretty, of course. Their original purpose in the Himalayan regions was to promote peace, compassion, strength, and wisdom. Contrary to common belief about them, they don’t carry prayers to gods but rather, prayers and mantras on the flags are intended to be blown by the wind to spread goodwill and compassion, benefiting all. 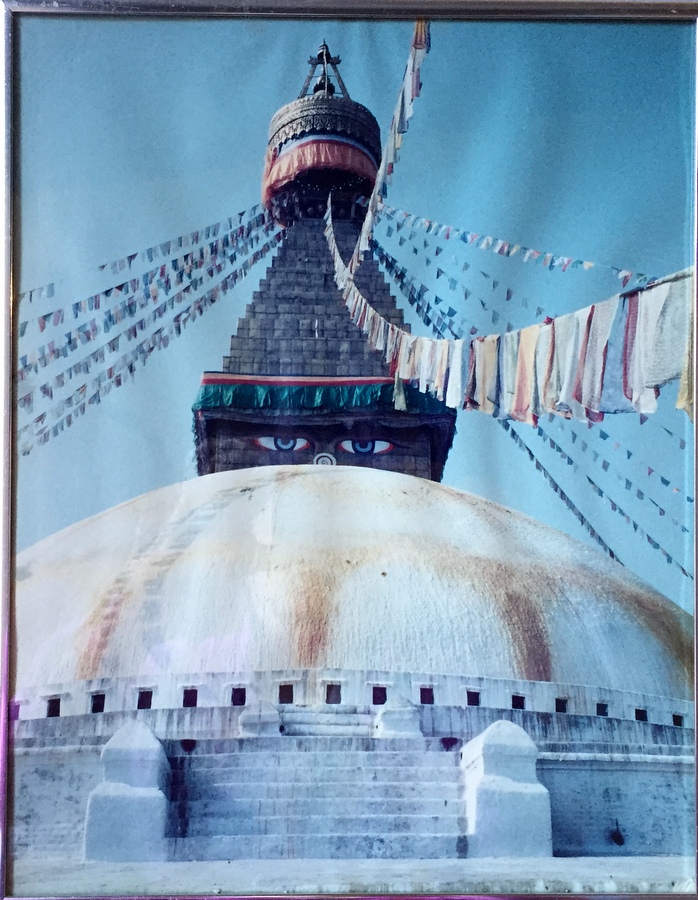 And their very impermanence has spiritual meaning. Tibetans mount new flags alongside the old, symbolizing the greater ongoing cycle that we’re part of.

Wikipedia tells us that during China’s Cultural Revolution, “prayer flags were discouraged but not entirely eliminated. Many traditional designs may have been lost. Currently, different styles of prayer flags can be seen all across the Tibetan region.”

About the colors, though, I have a bone to pick. Traditionally, prayer flags come in five exact colors, all primary, none that go particularly well in my garden, or dare I say, most gardens. Blue, white, red, green, and yellow represent the five elements that produce health and harmony in traditional Tibetan medicine, but I sure wish the flags came already faded and looked like the ones on this temple in Kathmandu.

(I took this shot on a Himalayan trekking vacation in the ’90s. The photo itself has faded a lot, though it’s still hanging in my home.)

Even better than prefaded, what if we could custom-order flags in the right colors for our gardens? I’d sure go for some purple. But after years of looking, I’ve concluded there’s no such source exists for custom colors, or even just different colors.  Oh, well. 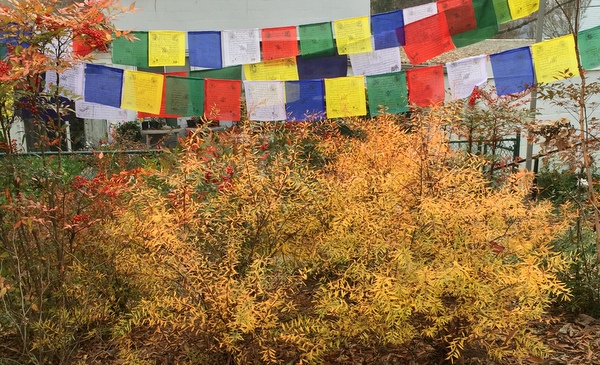 One more view and a parting plug for the shrub growing beneath my flags. The three ‘Ogon’ spireas are still full and gorgeous in mid-December. Also, they leaf out early with beautiful chartreuse, willow-like foliage. Really contribute a lot to the garden.