The very day I wrote about Prayer Flags in my Garden, complaining that they only come in primary colors, a neighbor volunteered to help me, writing on Facebook:

If I wanted to do this as a craft to match my garden I would go buy some fabric and an ink pad and stamps for making your own prayer flags or even just garden flags of some kind. Then just sew them over a cord. If you ever wanna do that – lemme know, I will help you. 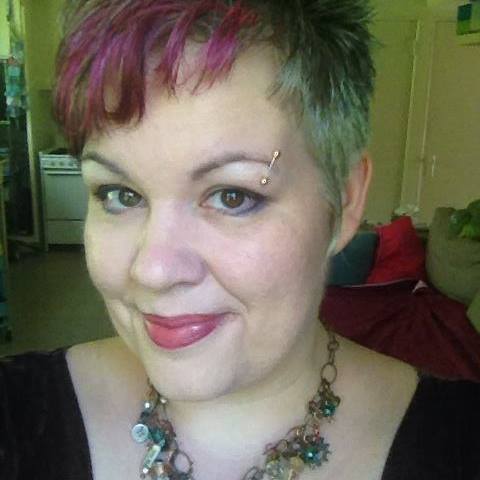 That was from Heather Brooks, who I knew as a local blogger and volunteer bartender at my favorite hang-out.

Another neighbor said she needed to block “clutter in a neighbor’s yard” and asked where to buy the stamps and black waterproof paint. Heather said to look “in the tee shirt decorating aisle at the craft store that are meant for textiles.”

Then a third neighbor chimed in: “I have a set of prayer flags and markers for creating my own and would love to get together with others, to make a series of prayer flags.” And that may actually happen.

But I’m not there yet.  First, I warned Heather that I “don’t have a crafting bone in my body,” but she expressed confidence anyway, volunteered to coach me, and suggested I first try natural dyes.

My research began with searching “natural vegetable dyes” on Pinterest (sample image above) and wow, so gorgeous! One pinner recommended this history of natural dyeing, a great start.

So where to buy them? They’re available from the same place I bought my prayer flags from, except that my favorite colors are out of stock.

So, I decided to try making natural dyes myself, and started this tutorial, with its luscious photos.

Now text is fine but the craft-challenged like myself need to be SHOWN, so on to Youtube, where I found this video by 16-year-old Devin Martin, a member of the Sparkling Martins, the hippie “unschooling” family in New Hampshire I instantly loved. In the video Devin uses spinach, red cabbage and tumeric, all with good results. I chose to try spinach and red cabbage, with decidedly mixed results.

My attempt with spinach was a bust. This package was the only offering at my grocery store, and maybe it’s to blame for the weak but ugly color I got after following Devin’s directions. I tossed it.

Tumeric can be used right from the spice container and seems to work really well, but isn’t a color I want for my prayer flags.

Red cabbage was a success, but with surprising results. I used a whole head, then divided it into three parts because it can be tweaked to create different colors. By itself, the result is lavender but because red cabbage is a pH indicator, it’ll turn blue when baking soda is added and pink when lemon juice or vinegar are added.

Except that when I did it, the intended blue became green, as shown here in the bottom pot and center in the finished muslin samples above. Did I use too much baking soda, so it blew past blue and turned green?

Whatever. I love it and the other finished colors – the unadulterated lavender on the right and a pretty pink on the left that was resulted from adding lemon juice.

My friend Pamela J, a life-long quilter, has joined in the dyeing project, with interesting results. Above you see 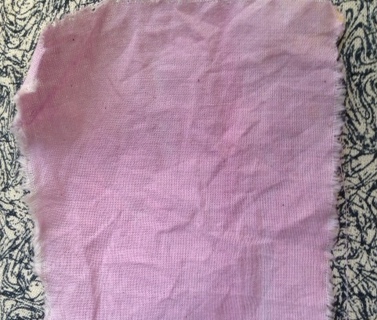 the rather uninspiring dye color produced with Liriope berries, but the result is nice, as are the tumeric yellow and the pale cranberry color produced by red wine, both available all year. Next, she used hibiscus and rose hip tea to produce the pretty pink shown on the right.

Lots of video-watching later, I’m pleased to report that precise instructions aren’t necessary because it’s all trial and error. Devin especially is a fan of winging it, dumping unknowable amounts of salt (a fixative), baking soda and lemon juice into his brews as his videographer mother urged him to at least guess at the amount, for the viewers’ sake. But Devin’s an experienced weaver who dyes his own yarn, so I trust him implicitly.

Everyone seems to agree on the need for gloves, covering the work area, and dressing your worst.

It’s not just the instructions that are imprecise; the results are a crap shoot. Among plants for dyeing, there’s not a lot available this time of year. Even the cost of red cabbage can add up, and using store-bought berries would cost a small fortune. And making dyes is a lot of work!

The final nail on the nature-dye coffin for me is that the results are probably temporary, anyway. This source explained that they don’t hold up to multiple washings, “so I imagine that the sun would fade these dyes, too…Maybe they’d be better suited hand-washed only and used for a pretty wall hanging out of direct sunlight?”

Commenters on forums and Youtube agree that natural dyes fade. True, it helps to use fixatives and then heat-set the results but in the end, it’s a lot of work for something that’s faint and fading fast.

With my two crafting coaches on alert, I’ll dye more muslin swatches but this time with – don’t hate me! – artificial dyes, because they’re cheaper, easier, and more permanent. Then I’ll try stenciling birds and plants onto the flags-to-be.

While this indoor project isn’t a match for actual gardening, it’s surprisingly fun and a good fit for me. A snow-birder I’ll never be but a craft-store regular, maybe so. 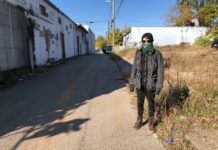